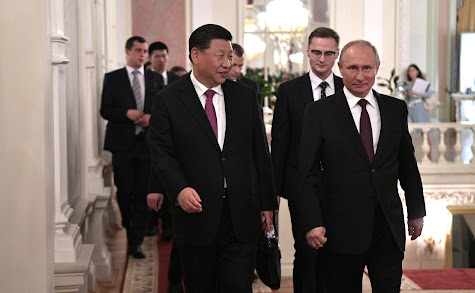 The world is on the edge of nuclear catastrophe in no small part because of the failure of Western political leaders to be forthright about the causes of the escalating global conflicts. The relentless Western narrative that the West is noble while Russia and China are evil is simple-minded and extraordinarily dangerous. It is an attempt to manipulate public opinion, not to deal with very real and pressing diplomacy.

The essential narrative of the West is built into U.S. national security strategy. The core U.S. idea is that China and Russia are implacable foes that are “attempting to erode American security and prosperity.” These countries are, according to the U.S., “determined to make economies less free and less fair, to grow their militaries, and to control information and data to repress their societies and expand their influence.”

The quotation above comes from an article first published in Common Dreams, and then republished by Consortium News on August 24, 2022. As it appeared in Common Dreams, the article, by Jeffrey Sachs, was titled, "The West's Dangerously Simple-Minded Narrative About Russia and China." What Sachs is saying is not unrelated to what I said in my blog posting published yesterday.
My attention was particularly attracted to Sachs' article because I recently attended a terrific dinner party - getting together with some old friends - but a dinner party that was marred, in my estimation, when one of the old friends launched into an unrestrained denunciation of China, asserting that China is, truly, an Evil Empire, outrageously and unscrupulously dedicated to one thing only, achieving total world domination, and replacing the United States as the world's protector and advocate for freedom and prosperity for everyone.
Many were the claims made against China, in this denunciation by my friend, but the one that seemed most extreme, at least to me, was the assertion by my friend that the fentanyl/opioid crisis in our country was, actually, the result of a series of evil actions by China, intended to undermine the social integrity of our nation, and to kill Americans.
Really, I had never heard this theory before, but it turns out that this is an explanation of our drug crisis that has attracted significant support in the United State Congress. My research revealed that on September 6, 2018, the House of Representatives Committee on Foreign Affairs, by way of its Subcommittee on Africa, Global Health, Global Human Rights, and International Organizations held a meeting that began with the following introductory remarks by Congress Member Christopher H. Smith, Chair of the Subcommittee. (You can click right here for a transcript of the entire hearing.):

I want to, first of all, thank all of our witnesses including our very distinguished witnesses from the administration, one, for your tremendous work that you are doing in this opioid crisis, and secondly, for taking the time out here to provide expert testimony. We do have a second panel of experts who will follow, so this, I think, will be a very enlightening and hopefully motivating hearing on what do we do next, and of course to go very deeply into the nature of the problem and how it has been exacerbated almost from month to month it is getting worse as we all know. Chinese made fentanyl, a synthetic opioid, is killing Americans, more than 29,000 in 2017 alone. We must hold the Chinese Government accountable. Kirsten Madison, Assistant Secretary of State for International Narcotics and Law Enforcement Affairs will testify today that China is a, quote,  ``primary source of illicit synthetic drugs coming to the United States'' (emphasis added).

I love my friend, who I think is a very good person, but I don't agree with the perspective on China that he propounded at that dinner party. I think Sachs has a better handle on how we ought to view our relationship with both Russia and China. There is, indeed, a "relentless" narrative (clearly one that is persuasive to my friend) that suggests that both Russia and China are implacable foes of our country, and that both nations are “attempting to erode American security and prosperity...”
Instead of buying into this "relentless narrative," I suggest that we pay attention to Sachs' observation that:

It’s past time that the U.S. recognized the true sources of security: internal social cohesion and responsible cooperation with the rest of the world.

Since developing internal social cohesion and establishing responsible cooperation with the rest of the world is the only way we have any chance of being successful in preventing nuclear holocaust, and in overcoming the destruction that global warming and climate change are wreaking upon the world, I think it is pretty important that we get with this program soon.
Like, immediately!
To Subscribe Just Click This Link
Image Credit:
https://consortiumnews.com/2022/08/24/the-western-narrative-on-russia-china/