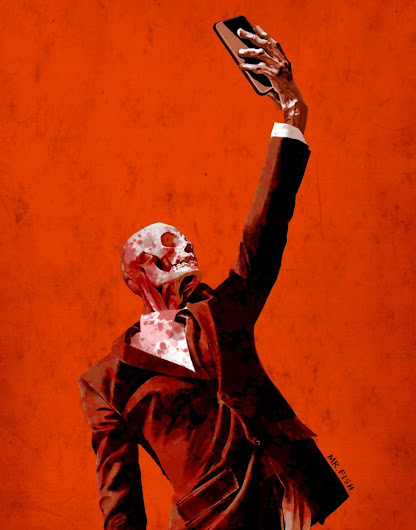 I found the image above to be arresting. It illustrates an article by Chris Hedges, in Consortium News. The image is identified in Hedges' article as “'Doomsday Selfie' by Mr. Fish."
In fact, the assertions in Hedges' article, which is titled, "The Final Collapse," is very much consistent with the "Doomsday Selfie" image. Hedges pretty much says that "Doomsday" is now upon us, and that there is no chance to escape, and that our civilization should be counted out. We're done!
I am quite familiar with Hedges, and I really appreciate the writing that Chris Hedges does. He is a truthteller, I think - and he consistently attempts to puncture America's sense of its own greatness, that sense of our own entitlement and probity that has led us into so many actions of overweening excess, particularly by way of military actions that are both despicable and perverse. Let me just name two of these, to give context to that comment: (1) Vietnam; (2) The War in Iraq. That is, of course, a short and very "partial list."
Consortium News plays the same role, within contemporary political journalism, that Chris Hedges plays with his writing. Consortium News and its writers hold up a mirror to contemporary events, and often suggest that the United States is in the "wrong," not in the "right," when we pay attention to what the government is actually doing (as opposed to what the government says it is doing). I appreciate Consortium News, as I appreciate Hedges, for helping us to take a look at where we are, and where we seem to be going from a critical perspective. If truth is important, criticism is vital.
I do, however, want to raise an objection to Hedges' article with the "Doomsday Selfie" illustration. Click right here to read Hedges' article for yourself.
Hedges begins his column by describing "a 100-foot-high temple mound, the largest known earthwork in the Americas built by prehistoric peoples." This mound, "Monks Mound," is located outside St. Louis, Missouri, and is a remnant of a former great civilization. Here is how Hedges ends the column:

By the 1400s Cahokia had been abandoned. In 1541, when Hernando de Soto’s invading army descended on what is today Missouri, looking for gold, nothing but the great mounds remained, relics of a forgotten past.

This time the collapse will be global. It will not be possible, as in ancient societies, to migrate to new ecosystems rich in natural resources. The steady rise in heat will devastate crop yields and make much of the planet uninhabitable. Climate scientists warn that once temperatures rise by 4C, the earth, at best, will be able to sustain a billion people.

The more insurmountable the crisis becomes, the more we, like our prehistoric ancestors, will retreat into self-defeating responses, violence, magical thinking and denial.

The historian Arnold Toynbee, who singled out unchecked militarism as the fatal blow to past empires, argued that civilizations are not murdered, but commit suicide. They fail to adapt to a crisis, ensuring their own obliteration.

Our civilization’s collapse will be unique in size, magnified by the destructive force of our fossil fuel-driven industrial society. But it will replicate the familiar patterns of collapse that toppled civilizations of the past. The difference will be in scale, and this time there will be no exit.

I have no quarrel with Hedges' warning of the dangers we face - nor of his dramatic and forceful way of trying to bring us to our senses. I want to caution us all, though, that predictions of what is claimed to be inevitable are always based on a failure to understand our real situation.
What we see, now, is never going to be an adequate predictor of the future (for good or ill). That is because we can act today (right now) and change the course of history. The realities we encounter are the realities we create ourselves.
Doom is always a possibility, but it is never an inevitable destiny. Furthermore, as Elizabeth West says (and she is another person who appreciates Hedges):

Remember: no matter how dire things become, no one can force us to surrender our right to love—nature, one another, ourselves—and to be loved. These will always be ours to choose.

Let's not forget that, because if we do, we will create the Doom that was not inevitable, but that we embraced only because we took no action, or took the wrong actions, to prevent its arrival. We will forfeit, as well, the joy to which Elizabeth West calls our attention.
That "Doomsday Selfie," pictured by Mr. Fish, is a possible, but not an inevitable portrait of our civilization, and of our individual fates.
To Subscribe Just Click This Link
Image Credit:
https://consortiumnews.com/2022/08/15/chris-hedges-the-final-collapse/