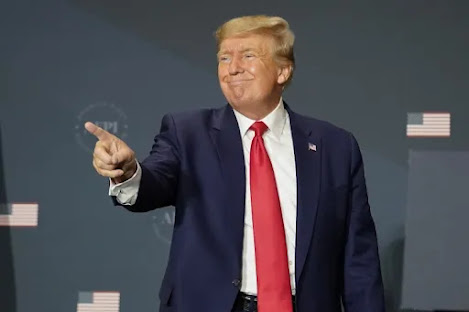 Kari Lake, a former television news anchor, is the Republican candidate for the governorship of the State of Arizona. Lake has been endorsed by the person pictured above. Having won the Republican Party primary, in early August, almost certainly because of Donald Trump's endorsement, Lake now faces a November matchup against Secretary of State Katie Hobbs, one of a handful of Democratic elected officials holding office in Arizona.
I mention Lake, while picturing our former president, because Lake has opined that Donald Trump has "BDE." For the uninitiated (which was my own condition before reading the Twitter posting linked here), "BDE" translates as "Big Dick Energy."
This rather pungent description of the attraction that our former president seems to have for so many (and Lake gives comparable status to Florida Governor Ron DeSantis), is more professionally or academically described as "charisma."
In fact, it was an online commentary by conservative columnist Jonah Goldberg - talking about charisma - that led me to Lake's characterization of the Trump-DeSantis appeal as "BDE."
Below, I am quoting what Goldberg has to say about charisma. I think he is on target in warning us to be suspicious of how charisma operates in the political arena. In fact, I think that Goldberg's column reinforces my advice, provided in earlier blog postings, to shun the idea that we are supposed to be electing "leaders."
As Bob Dylan so nicely expressed it, in one of his earliest songs, "Subterranean Homesick Blues."

Trying to elect "leaders" with "charisma," with "BDE," will almost certainly result in us all getting screwed.

Column: The paradox of Trump's charisma
Jonah Goldberg
Donald Trump has a lot of charisma.

Let me finish. I do not mean charisma in the colloquial sense of being charming, though he has charmed millions. I’m referring to a style of leadership famously described by the German sociologist Max Weber, who described three forms of authority or leadership: traditional, legal-rational and charismatic.
In traditional societies monarchs derive their authority from custom. In modern societies, most leaders — elected or otherwise — are chosen based on their qualifications and expertise and their authority is prescribed by law. Charismatic leaders bring something else to the equation: an inner quality that commands loyalty and even worship.
The ancient Greeks used the word “charisma” to mean a divine gift or grace. Weber secularized it to mean some quality that inspires intense followership. “Men do not obey [a charismatic leader] by virtue of tradition or statute,” Weber observed, “but because they believe in him.” I suspect that Arizona Republican gubernatorial candidate Kari Lake is not a close student of Weber’s, but she captures the idea well enough when she talks about Trump’s “BDE.” You can look that up.
One of the paradoxes of charismatic leadership is that the leader’s illegitimacy — in legal, rational or traditional terms — can have the effect of strengthening their hold on their followers. This dynamic has been at the heart of Trump’s distortion of the right. If the man cannot measure up to the traditional, moral, rational or legal yardsticks that conservatives once ascribed to leadership, then it is the yardstick’s fault for not measuring up to the man.
If you’re immune to Trump’s charms you’ve probably had the experience of trying to argue with someone who adores the man. The more you press the point that their faith is irrational or otherwise unjustified, the more intense their devotion becomes.
And when the system of laws confronts the charismatic leader, his followers not only see that as proof of his superiority, but of the system’s illegitimacy.
When the FBI investigated Hillary Clinton, Trump followers said that proved her corruption. But when the FBI investigates Trump, it’s proof of the FBI’s corruption. If “the system” — or the “establishment” — cannot abide the man, it is the system that is to blame. When the issue is the alleged mishandling of classified material by anyone other than Trump or his subalterns, it is a grave problem. But when it’s Trump who is in the crosshairs, the outrage is the existence of classified material. Hence Republican Rep. Bob Good’s preferred solution is simply to “Just declassify everything.”
Moreover, through the magic of psychological transference, criticism of charismatic leaders is transmogrified into an attack on all those who love him. Hence the paradox of Trump. When he is at his most indefensible that is precisely when the irrationality of his defenders becomes most intense.
That intensity often takes on a quasi-religious quality. “Donald Trump Is the MLK of the Working Class and Christians. No Wonder the FBI Is Persecuting Him, Too” is the headline of one recent article from the acolyte camp.
If charisma is a kind of divine grace, then insulting the charismatic leader is a kind of sacrilege. In the wake of the FBI’s search of Trump’s home, Charlie Kirk, a pliant priest in Trump’s personality cult declared, “That wasn’t just a raid against Trump, that was a raid against your values. That was a raid against you.” Mar-a-Lago is where Trump did some of his best work as president, Kirk explained, thus the search was “a desecration of the conservative movement!” It’s a strange form of conservatism that says a lawful warrant has no authority on holy ground.
It’s worth noting that just as devotion to charismatic leaders can take on the flavor of religious devotion, opposition to them can too, which is why the rhetoric against Trump can get as ahead of the facts as the defenses of him. Demagoguery, which Weber identified as a common form of charismatic leadership, has always been the Achilles' heel of democracy. But the demagogue’s lawlessness is not the only threat; a weakening of the rule of law in defeating the demagogue can be a hazard, too.
The only way out of this mess is through. Our system was expressly designed to withstand the stresses of popular passion. As the blessedly uncharismatic Calvin Coolidge said, one with the law on his side is a majority. That’s the only kind of majority our legitimate leaders should be serving now (emphasis added).
To Subscribe Just Click This Link
Image Credit:
https://www.realclearpolitics.com/2022/08/16/the_paradox_of_trumps_charisma_577228.html