#276 / A Collection Of Fragile Individuals 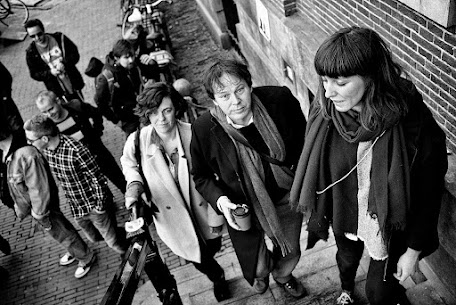 That's David Graeber, shown with a cup of coffee, climbing up the stairs in Amsterdam, in 2015. Wikipedia identifies Graeber as "an American anthropologist and anarchist activist." He died, unexpectedly, in September 2020.
Graeber's most recent book, written with David Wengrow, became a sensation when it was published, posthumously, in 2021. The Dawn of Everything: A New History of Humanity received rave reviews, with The New York Times saying:

The Dawn of Everything fundamentally transforms our understanding of the human past and offers a path toward imagining new forms of freedom, new ways of organizing society. This is a monumental book of formidable intellectual range, animated by curiosity, moral vision, and a faith in the power of direct action.

Recently, Jacobin Magazine published a very brief essay by Graeber, written just shortly before he died. I am providing the entire text of Graeber's essay below, which focuses on "what life and politics could look like after the COVID-19 pandemic."
Here is the the line that stood out to me:

We are a collection of fragile beings taking care of one another...

We are, aren't we? "Fragile individuals" but "in this together." We will survive only if we succeed in "taking care of one another."
So, let's start working on that - on dealing with the traumatizing terrors of our current situation by finding out how we can, truly, "take care of one another." Graeber has some suggestions!
Like the bumpersticker said: "Love Thy Neighbor. (No Exceptions)."
oooOOOooo

After the Pandemic, We Can’t Go Back to Sleep
By David Graeber
At some point in the next few months, the crisis will be declared over, and we will be able to return to our “nonessential” jobs. For many, this will be like waking from a dream.

The media and political classes will definitely encourage us to think of it this way. This is what happened after the 2008 financial crash. There was a brief moment of questioning. (What is “finance,” anyway? Isn’t it just other people’s debts? What is money? Is it just debt, too? What’s debt? Isn’t it just a promise? If money and debt are just a collection of promises we make to each other, then couldn’t we just as easily make different ones?) The window was almost instantly shut by those insisting we shut up, stop thinking, and get back to work, or at least start looking for it.

Last time, most of us fell for it. This time, it is critical that we do not.

Because, in reality, the crisis we just experienced was waking from a dream, a confrontation with the actual reality of human life, which is that we are a collection of fragile beings taking care of one another, and that those who do the lion’s share of this care work that keeps us alive are overtaxed, underpaid, and daily humiliated, and that a very large proportion of the population don’t do anything at all but spin fantasies, extract rents, and generally get in the way of those who are making, fixing, moving, and transporting things, or tending to the needs of other living beings. It is imperative that we not slip back into a reality where all this makes some sort of inexplicable sense, the way senseless things so often do in dreams.

How about this: Why don’t we stop treating it as entirely normal that the more obviously one’s work benefits others, the less one is likely to be paid for it; or insisting that financial markets are the best way to direct long-term investment even as they are propelling us to destroy most life on Earth?

Why not instead, once the current emergency is declared over, actually remember what we’ve learned: that if “the economy” means anything, it is the way we provide each other with what we need to be alive (in every sense of the term), that what we call “the market” is largely just a way of tabulating the aggregate desires of rich people, most of whom are at least slightly pathological, and the most powerful of whom were already completing the designs for the bunkers they plan to escape to if we continue to be foolish enough to believe their minions’ lectures that we were all, collectively, too lacking in basic common sense do anything about oncoming catastrophes.

This time around, can we please just ignore them?

Most of the work we’re currently doing is dream-work. It exists only for its own sake, or to make rich people feel good about themselves, or to make poor people feel bad about themselves. And if we simply stopped, it might be possible to make ourselves a much more reasonable set of promises: for instance, to create an “economy” that lets us actually take care of the people who are taking care of us (emphasis added).
To Subscribe Just Click This Link
Image Credit:
https://jacobin.com/2021/03/david-graeber-posthumous-essay-pandemic