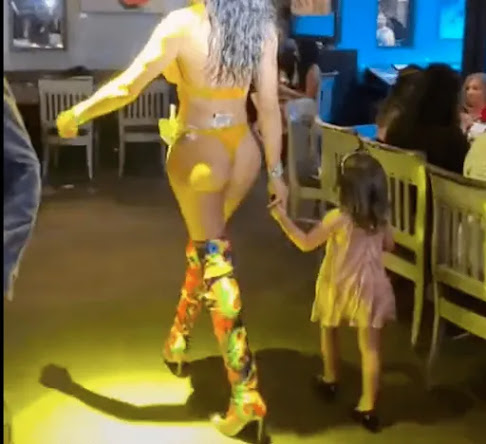 "Where are you marching?"

"Where are you going?"

Rod Dreher writes a column for The American Conservative. Dreher is the one who has posed that "Where are you going?" question - and orginally with specific reference to the image at the top of this blog posting.
The title of the Dreher column, commenting on the picture, is "Quo Vadis, America?" It is Dreher's belief that "America," and specifically the "progressives" that Dreher believes have achieved cultural supremacy in the United States, are going straight to Hell, and that Hell is going to look a lot like that picture I have reproduced above:

There is our future, America, if we stay on this path. A trans stripper leading a child down the primrose path is a condensed symbol for the road to hell down which our country is walking. Seems like there’s a new moral and cultural low every day here in a country led by a Democratic president who said that advancing the goals of groomers like the trans stripper above is “the civil rights issue of our time.” It is hard to believe that the Democratic Party as well as the entire ruling class of the USA has been captured by decadence to this degree. But here we are.

Dreher is hysterical (for a purpose) in many, if not most, of his columns, which I regularly read. Whether you think the picture is positive, or the opposite, I would hope that we might agree that it is totally unfair and manipulative to suggest that President Biden is somehow in support of "a trans stripper leading a child down the primrose path."
Personally, I'd bet against it, and I would like all of us - on all "sides" of the cultural / social / economic / political wars that seem increasingly to be raging around the country - to try to deescalate the rhetoric.
Whether we like it or not, we are "in this together," and we ought to start trying to figure out how to make our political system work in a society that is, so clearly, at odds with itself.
It is probably worth noting that Dreher is someone who reveres Viktor Orbán, who has served as the Prime Minister of Hungary since 2010. Orbán was recently profiled in The New Yorker, in an article titled, "Letter from Budapest: Does Hungary Offer a Glimpse of Our Authoritarian Future?" Dreher was quoted extensively in support of Orbán, and professed a desire to take up a permanent residence in Hungary, where the politics are more to his liking than the politics here in the Unites States of America. Many would pose that "where are you going?" question to Dreher, too, considering his declared preference for authoritarian politics, and would posit a destination in Hell for Dreher and any who might choose to follow him.
Couldn't we all just "tone it down," a bit? Let's not permit hysterical overstatements to prevent us from working together to deal with the truly significant challenges we face.
We do face immense challenges (with the fate of the world in the balance), and we face those challenges together, whether we like that or not.
Facing the certainty of global warming, and the existential challenges it poses, facing the danger of atomic war, and facing the agonizing realities of income inequality and its impacts on our society, we had best realize our actual situation, and start trying to work together!
Quo Vadis, America? It's a good question! We are in this together, and we need to figure out what we do now.
To Subscribe Just Click This Link
Image Credit:
https://www.theamericanconservative.com/dreher/quo-vadis-america-2022-weimar-trans-stripper/ [since removed]