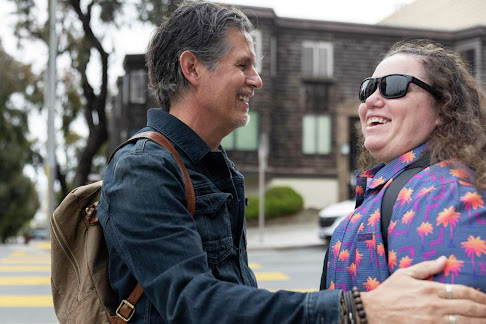 There are websites that promise to deliver only "Good" news. Or "Happy" news. Or "Positive" news. Or "Uplifting" news." Or "Nice" news. If you'd like to subscribe, feel free to click those links!
The San Francisco Chronicle, which I have been reading, daily, for about seventy years, makes no claim to deliver news that is nice, uplifting, positive, happy, or good. On August 4, 2022, however, the paper I picked up from my front yard did have a very "nice news" item. Given the Chronicle's prodigious paywall, I have made the Chronicle article available below.
The entire purpose of my blog posting today, in fact, is simply to provide anyone reading it with an opportunity to read the Chronicle story, and to consider the possibility that some kind of "awesome humanity" is actually present in each one of our lives, and is available to us, every day, and everywhere.
Stories like the one below, of course, are not "everyday" features. They are exceptional. But aren't we moved when we find that there is, mostly invisible and unnoticed by everyone, an underlying "awesome humanity" that makes possible truly wonderful sacrifices and accomplishments?
"Possibility" is my favorite category. Our ability to precipitate into the visible and "real" world our usually hidden and unnoticed, but "awesome," humanity" is one of our glories.
Let us not be shy about recognizing that fact!
oooOOOooo
She was born on a S.F. street corner, delivered by a ‘random dude.’ 30 years later, they finally met
Sam Whiting
Up until Wednesday morning, Patrick Combs had not seen Searcy Hughes since the day she was born, June 29, 1988, an occasion noted on the front page of the next morning’s Chronicle.

“S.F. student delivers baby on sidewalk on his way to work” was the headline.

“Searcy,” Combs called out, as if recognizing her before dashing across Hayes Street to meet Hughes for a long embrace in front of some bewildered tourists looking for the Painted Ladies.

Combs, 56, flew in from San Diego and Hughes, 34, came from South Dakota just for this extraordinary reunion. They walked arm in arm to 580 Fell St. so Combs could re-enact their prior meeting, the details of which were so astonishing that each of the crucial details earned its own paragraph in the 1988 Chronicle story. 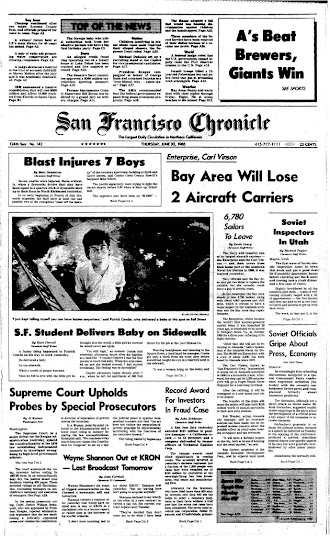 “A funny thing happened to Patrick Combs on his way to work yesterday.

He delivered a baby.

While a crowd of people watched.

Then he fell in love with the little girl he brought into the world, a little girl he worried he would never see again.”
That last part turned out to be true on Combs’ end because he worried about it for 34 years, never knowing the name of the baby he helped deliver.

But Hughes found his name after she tracked down the Chronicle story of her birth and located Combs in San Diego, where he works as a motivational speaker for businesses and executives.

The baby girl, named Crystal by her birth mother, was soon given up for adoption and raised mostly in Virginia’s Shenandoah Valley.

“I vaguely knew that the story of my birth was sort of a big deal,” said Hughes, who is a prison guard in Sioux Falls, S.D. “So I asked a friend to type the keywords ‘Crystal,’ ‘baby’ and ‘born on the street’ into the Ancestry.com website.” The friend got an immediate hit to The Chronicle story, and the mystery was solved.

“Suddenly the story I heard my whole life about being born on the street by some random dude, that I didn’t even know was true, turned out to be very real,” she said. “Getting that proof was a huge solidifying moment.”

Facebook helped her find him, and that led to a video he had posted, telling the story of her birth. On Thanksgiving of 2019, she sent a Facebook message saying, “I keep typing ‘hi Patrick’ and it just doesn’t feel like enough.”

Combs saw that first sentence as he was driving in his car and knowing what was coming, he pulled over and broke into tears.

“You are the man who caught me when I was born ... I am searching for answers.” Combs had been waiting to tell her the story her entire life.

“I thought this would be the great mystery of my life that I would never see the answer to. When I realized that she had somehow found me, this huge giant crescendo of a wave rolled through my soul.”

“I’ve waited 31 years hoping for this moment,” he messaged her back, two days later. Knowing how emotional it would get, they waited a few weeks before talking on the phone, when she sprung on him her main question: Did he know the name of her birth mother?

He did. Bonnie Bennett. Her subsequent search for her was not as successful. Bennett died just six months after her daughter was born, of a drug overdose in San Francisco, at age 23.

“I was deeply wanting to know what happened to that baby who was born on the sidewalk,” he said, “so when she reached out to me it was just an astonishing miracle that I thought would never happen. It was like an answered prayer.”

The prayer played out as he approached his old apartment building and said, “OK. Here we go,” before he detailed coming out of the building around 7 a.m. and heading down the street toward his job at Levi Strauss & Co. when he saw a woman down on the sidewalk.
“She said, ‘Call me an ambulance. I’m pregnant,’” Combs said. He deduced she had crawled up some steps from a light well but made it no farther. Knocking on doors, he finally got into a building to call 911.

By the time he got back to the woman on the sidewalk, “you were on your way,” he said to Hughes. “I told your mother, ‘Don’t be afraid,’ then I moved into position and your mom did the most heroic act.”

When the baby landed in his hands, he at first thought she was dead. “Then your eyes popped open like the headlights on a Fiat. Then you looked at me and started crying.” At which point the medics finally arrived.

“I didn’t remember what your mother looked like until I saw you,” he said to Hughes. “That’s how much you look like her.”

Reliving that long-ago morning on this morning was overwhelming and Combs and Hughes engaged in a longer and tighter hug than the earlier one.

“It definitely hit me super hard, but it’s not a sad feeling,” Hughes said after taking off her shades to wipe her eyes.

“It’s a feeling that so much awesome humanity happened right here on the sidewalk.”