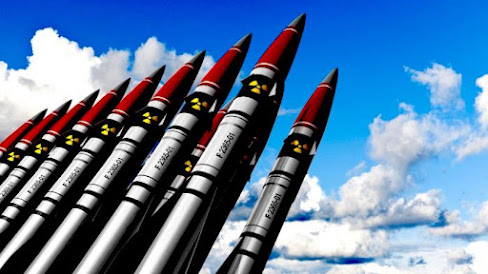 According to Yulia Latynina, "The West Needs an Arms Race." Latynina is a Russian writer and journalist. According to Wikipedia, she has "written more than twenty books, including fantasy and crime fiction." Click the link to her name to find out more.
Latynina made her claim that "The West Needs an Arms Race" in a column in The Wall Street Journal on July 7, 2022. I think that this column is, perhaps, most properly classified as "fantasy" and/or "crime fiction." Here is the essence of Latynina's pitch:

A new arms race is the only option for the West. The Russian offensive flounders in the face of superior firepower. On battlefields where there are no modern weapons, the barbarian Russian army, with its tactics of cannon fodder and indiscriminate shelling, slowly prevails. Where the Ukrainian defenders have been equipped with Western artillery, Russia’s stockpiles explode into fireworks and its fodder troops are burnt like chaff.

A world without a war is only a dream. When the strong and just refuse to fight with the weapons they have, thugs and bullies can do what they want. The West must build precision weapons that can take out Russia’s nuclear silos—and let Mr. Putin know that they aren’t afraid to use them. Develop drones that can hunt and kill terrorists. An open society can’t dictate to rogue states how to live. But it should be able to prevent aggression like the invasion of Ukraine (emphasis added).

I do not buy the idea that a world without war is only a "dream." At least, I don't buy that idea if the word "dream" is meant to denote something that has no possibility of becoming a reality - and that is exactly how Latynina means to define the word.
In opposition to Latynina, I happy to associate myself with John Lennon's understanding of the power of dreams (click right here to follow up on this reference). And with respect to thinking about "dreams," I am planning to take my advice from both my father and South Pacific's "Happy Talk," rather than to follow Latynina's suggestion that finding new ways to kill other people, with precision, will put us on the pathway to peace.

The statement just highlighted in large font bold was the lesson that my father attempted to convey to me as his highest priority contribution to my education. He had some difficulty in convincing me, I may add. I was resistant; I was pessimistic; but my father won my agreement in the end. This statement is profoundly good advice. We can make either our "dreams" or our "nightmares" come true, because "possibility" is the defining truth of our existence. The world we most immediately inhabit is the world we have created ourselves, and that is a world that we can change.
Can we imagine the world-transforming power that would be released if the United States started doing the exact opposite of what Latynina advises? What amazing energy would be released if we announced that we would, each year, reduce our military and war-linked spending by, say, 10%, and redirect those monies to efforts to reduce carbon emissions, and to bring housing and health care to everyone who needs it, in our own country, and everywhere.
Like Lennon says:

You may say I'm a dreamer, but I'm not the only one!