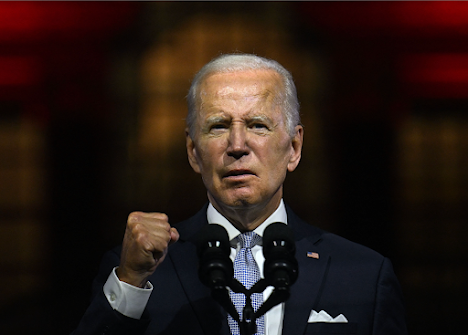 I didn't watch the President's speech on Thursday, September 1, 2022, but I did read about it in The New York Times. Anyone who would like to read a transcript of the president's remarks can click right here. It is also possible to watch a video replay by clicking this link.
The president's speech was a warning to the nation, with the president claiming that "MAGA Republicans" posed a clear and present danger to American democracy. As The Times' story noted, Republicans are claiming that Mr. Biden's speech had the effect of "maligning the 74 million people who voted for Mr. Trump in the 2020 election." Here's a quote from the article:

Joe Biden is the divider in chief and epitomizes the current state of the Democrat Party,” said Ronna McDaniel, the chairwoman of the Republican National Committee. “One of divisiveness, disgust and hostility towards half the country.

At least to me, Biden's speech does appear to have something in common with the famous remark by Hillary Clinton, made during her 2016 presidential campaign. That remark, as you may remember, called those who supported Donald Trump a "basket of deplorables." To my mind, Clinton's comment was way off base - and I think that her "deplorables" comment was "bad politics," if nothing else. I attribute Clinton's 2016 loss to Donald Trump, in significant part, to this single, petulant remark.
President Biden, if his speech can indeed be placed into the same category as Clinton's comment, has made an exponentially bigger political bet than Clinton did. Matt Taibbi, a journalist and podcaster, and a contributing editor for Rolling Stone, is not what I would call a conventionally conservative commentator.  Taibbi's reaction to the Biden speech, however (with respect to both content and context), was most definitely not positive:

President Biden in his primetime speech Thursday sure sounded like a man preparing to criminalize Trumpism. Is the White House expanding the great policy error of our time?
He looked shaky as he hobbled onstage Thursday night, but at the podium the drugs kicked in and Joe Biden delivered a commanding speech, by his standards. He handled an early bout of hoarseness like a pro, matched affect to content most of the way, and fumbled few words and none seriously.
But something was off from the start. Biden’s handlers had the otherwise inspiring setting of Philadelphia’s Independence Hall bathed in so much blood-red light, he looked like an opening act for Queensrÿche or Rammstein. Trying to create a setting for judgment and warning, they overshot the staging and made the white-haired ex-Senator look like a vampire sat up from a crypt.

For those who don't know - and I didn't - the references in Taibbi's commentary, for which I have provided links, above, are to a couple of heavy metal bands. This makes sense, I suppose, for someone who regularly writes for Rolling Stone.
The staging chosen for the president's presentation certainly did call up, at least for me, the kind of hellish associations that some heavy metal concerts also bring to mind. The caption on the picture below, which ran in The Times, emphasized that the president's speech presented a "dark portrait of a democracy on the brink." The staging, in other words, was intentional, and was clearly central to the assertions that the president made in his remarks. 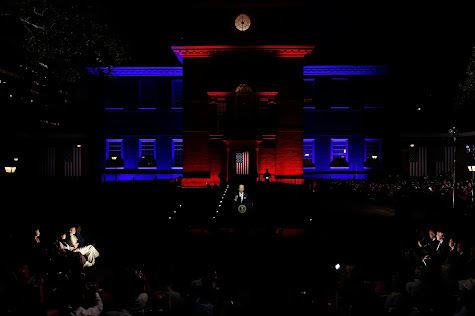 Does America today face real and extremely dangerous challenges to democracy? Absolutely. Were some of the commentaries and actions of Trump supporters in 2016 "deplorable?" Without question! Were those who invaded the Capitol on January 6th, urged on by the president, engaging in acts of insurrection, and were those acts of insurrection worthy of prosecution? I think so. I also think that the former president's actions, both before and since January 6th, have constituted a continuing attack on democracy, particularly as those actions have been endorsed and amplified by those who follow him. Do all these things constitute real grounds for concern about the future of our nation? Again, absolutely!
But....
If we want to recapture our ability to confront and surmount the real dangers that face us - including global warming and climate change, massive economic inequality, the burgeoning threat of atomic war, and the real dangers facing our democracy - we must seek, always, to remind ourselves that we are "in this together."
Recently, my blog postings have urged us not to emphasize and elevate our "divisions," but to celebrate our commonalities. I have spoken favorably of New York Mayor Eric Adams' advice that we "get the accent right," and not escalate deplorable incidents into a judgment condemning our entire reality. I think my advice on these topics is good advice, and my advice for ANY president is that a president must always strive to be the "uniter in chief," not the "divider in chief."
When a president is elected, that person is usually the choice of only a bare majority of the people. But the president is expected to be a president for all the people, not just for those who marked ballots in the president's favor.
I get nervous when remarks made by our president, as our national leader, seems ready to "write off" large numbers of people, and particularly when those people the president "writes off" are defined by a category (like MAGA Republicans) instead of by their actions.
In many ways, we always walk along the edge of Hell, with doom and total disaster a constant possibility. Since that's true, maybe we should be talking about the "worst case scenario" all the time. That is certainly one option.
Focusing on doom, however, is not what I think of as a good strategy. Thus, I don't think that it's a good idea for the president to suggest that it's likely that our democracy is about to fail. Maybe (and I don't mean we should disregard reality), we can do better in forging an understanding that we are "all in this together," by emphasizing the things that should be bringing us together, instead of listing out our differences. At a time when ideas of danger and doom threaten to overwhelm us, perhaps our best strategy is to turn our thoughts to what the Carter Family sang about.
From my perspective, we'd do best by trying to "Keep on the Sunny Side" with our thoughts, and expectations, and with our hopes and dreams, and push those "heavy metal" thoughts and dark predictions into some less prominent position. After all, the Biden Administration has a lot of positive things to talk about. Let's talk about those!
To Subscribe Just Click This Link
Image Credits:
(1) - https://taibbi.substack.com/p/biden-brings-the-war-on-terror-home
(2) - https://www.nytimes.com/2022/09/01/us/politics/biden-speech-trump-maga.html
(3) - https://youtu.be/ZbmQQ4RfzVE