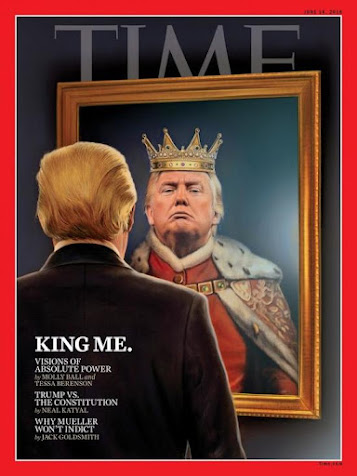 The United States Constitution is profoundly anti-King. The duties of our Chief Executive are spelled out in Article II. That Article of the Constitution outlines the President's duties and powers by saying that the President is to take care that the laws (which come from Congress) are "faithfully executed."
By the way, on a point that is now in the news, that Constitutional assignment would most definitely apply to any legislation passed by the Congress that specifies how top secret and classified materials should be handled. At any rate, as the Constritution makes clear, the President's powers and duties are specifically limited, and are subsidiary to the powers of the Congress, whose elected representatives act on behalf of "the people."
In the United States of America, in other words, the "people" take precedence. That's why the Preamble to the Constitution begins with these words: "We, the people...." The American idea of government is that "the people" are supposed to be in charge.
Just in case there might be any confusion about our official anti-King stance, Article I of the Constitution, in Sections 9 and 10, specifically prohibits the United States, and all of the States, from making any "grant of nobility."
No Kings here! That's a basic premise of our system. In our country, everyone is equal under the law - and is equally subject to the law. Thanks to our most recent former president, we're getting a refresher course in these basic tenants of Constitutional law. Will the Justice Department prosecute the former president for violating the law, which it certainly appears that he has violated? That remains to be seen, but if it can be demonstrated that our former president did violate the law, it would be absolutely proper for the former president to be prosecuted,  That, actually, is beyond discussion.
Remember, No Kings here!
oooOOOooo
Amidst the current controversy, I thought it was pretty humorous when Daily Kos, a political website that publishes an associated newsletter, sent out a replay of a newsletter item first published on July 1, 2022. Daily Kos used the Time cover, reproduced above, to illuminate the following comment, which came in response to a statement that our former president is alleged to have made when the Secret Service wouldn't take him to the Capitol, on January 6, 2021, to join in the effort to "hang Mike Pence."
Here is the statement attributed to our former president:

I'm the f**king President of the United States, you can't tell me what to do.

That statement, above, is what our former president is alleged to have said, when Secret Service agents assigned to protect him refused to take him to the Capitol, to spur on the insurrection.
And here is the humorous Daily Kos response:

I think that Traitor Trump is still far too obsessed about the “king” part of that assertion.

Congratulations to Daily Kos! That was well said!
Interestingly, we get the same "No Kings" message from Liz Truss, who has just been elected as Britain's Prime Minister (in a country that still has a heriditary monarchy). Click here for a video with a teenage Truss calling that system "disgraceful."
By the way, good luck, Liz Truss (and Britain)! I think you're going to need it.
And now, for one final, repetitious, reminder: Whatever happens in England, No Kings here!
To Subscribe Just Click This Link
Image Credit:
https://www.dailykos.com/stories/2022/7/1/2107838/-Secret-Service-Sources-confirm-Cassidy-s-Chilling-Claims (Time Cover, June 18, 2018 - Meredith Corporation)