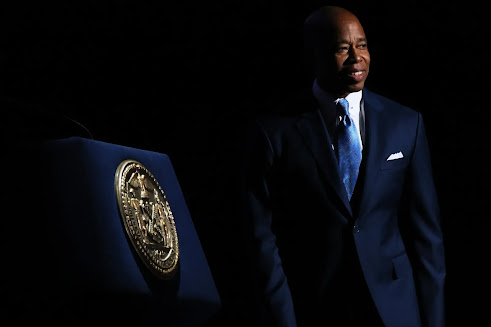 Maureen Dowd, The New York Times' columnist, wrote a very nice profile of New York City Mayor Eric Adams. Dowd's profile was published on Sunday, July 10, 2022. Online, the title of her profile is as follows: "Eric Adams, The Mayor Who Never Sleeps." I enjoyed learning more about Adams, and if you can penetrate the paywall that probably awaits non-subscribers, I think Dowd's profile is worth reading.
I was particularly struck by the following exchange between Dowd and Adams, as they discussed concerns about crime and public safety (big issues in the Big Apple). Adams is a former police officer, and bringing safety to the streets of New York was a prominent theme in his successful campaign for mayor.

I told the mayor that people I’ve talked to are still hopeful about him but seem to be getting impatient. One of my colleagues had told me the day before that she was taking the 2 train and saw a man punch his girlfriend in the face during an argument.

“If you place the accent on the wrong letter, you’re going to mispronounce the word,” Adams said. “If you place the accent on the wrong moment in your life, you’re going to mispronounce your life. Place it on how many times you got on the train and nothing happened to you. Nothing eventful. That’s where the accent should go, not ‘Hey, this is my 900th ride and you know what, I saw a homeless person today. Oh my God, things are out of control.’ They’re not.”

I think Adams is providing some pretty good counsel, here. The "meaning" of events is not necessarily inherent in the individual events themselves. Oftentimes, we bring a preconceived "meaning" to the events, and so the meaning of the events, as we perceive that meaning, can reflect what we are predisposed to think. If we are predisposed to think that things are "out of control," then relatively minor events can confirm that predisposition. Of course, the opposite is also true. If we are of a mind to think that things are "just fine" in society at large, then even horrific events may not convince us otherwise.
As I have argued before, we all have a tendency to "do what is expected." In the same way, we are also susceptible to "thinking what is expected." We pick up the signals from the ambient environment, and all of our experience then tends to confirm what we are already predisposed to believe.
Do we see ourselves living in a "House Divided"? There is lots of evidence to confirm that hypothesis, but seeing things from a slightly different perspective, the evidence of division may actually confirm the opposite truth. Click that link (or click the next one) if you don't remember my July 6th post!
We all speak with an accent of some kind. Like Mayor Adams says, let's be sure we put that accent on the right syllable. Let's be sure to get the accent right!
To Subscribe Just Click This Link
Image Credit:
https://www.nytimes.com/2022/07/08/opinion/eric-adams-mayor-new-york.html