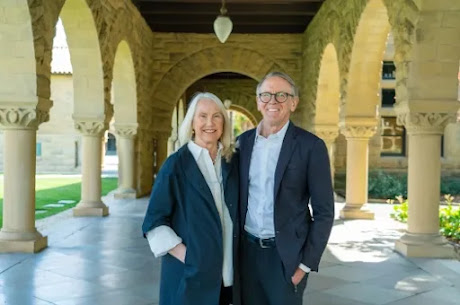 Venture capitalist John Doerr, and his wife, Ann (both pictured above on Stanford's Inner Quad), have given $1.1 billion to Stanford University, to set up a new school on the campus that will be devoted to the study of climate change and its solutions.
This "Climate School," as both the San Jose Mercury News and the San Francisco Chronicle have called it, will officially be named the "Doerr School of Sustainability." Incidentally, this is not our nation's first "Climate School." Columbia University also has one, and Columbia just calls it the "Columbia Climate School." As far as I can tell, there weren't any billion-dollar donors around when Columbia set up its program, which probably explains why plain-old "Climate School" was good enough for Columbia.
I think it is a very good thing that our best institutions of higher education are now trying to focus on the need to combat global warming and the associated climate changes that are putting human civilization - and tens of thousands of living species - in extreme peril. Anyone reading one or more of my recent blog postings - like the one you can read by clicking this link - would certainly know this.
So, thank you John and Ann Doerr - but with a significant footnote! Providing economic resources to have the "best and the brightest" of our educators work on ways to avoid the global warming catastrophe that we can so plainly see coming is definitely a good thing. What is NOT so good is the proposal to accept financial support and contributions from the fossil fuel industry. According to an opinion column published in The Stanford Daily, that is exactly what is happening.
I have another comment about Stanford's new "Climate School" curriculum, too. Here is what The San Francisco Chronicle says about that, in the news story linked above:

The School of Sustainability will open Sept. 1 with 90 Stanford faculty coming from other departments with 60 positions to be added later, the university said. The initial push will be in four areas: energy systems, climate, sustainable development and environmental justice.

The first students will come over from the existing school of earth sciences, which will be folded into the new school, along with its faculty.

Undergraduates may declare majors in disciplines to include the oceans, civil and environmental engineering, climate science, and global and environmental policy. There will be an undergraduate bachelor of science degree along with master’s and doctorate degrees. The first degrees will be conferred in June 2023.

It appears to me that Stanford and the Doerrs are treating the global warming problem as, mainly, a "technical" problem, a problem that can be achieved by working on "the science," with efforts aimed, mainly, at "engineering" solutions.
I would like to suggest that this is an inadequate way to approach the global warming problem, which is a "human" problem even more than it is a scientific or engineering problem. Where are the faculty from education, sociology, philosophy, history, economics, literature, anthropology, psychology, religion, and politics?
We will not be able to "engineer" ourselves out of the crisis we have created. We are going to have to transform how we conduct ourselves as human beings, in the face of the climate crisis we have brought down upon both the human and natural worlds. Engineers and scientists are needed, certainly, but those in the humanities and social sciences must be called to the task, as well. The crisis we face is truly an "all hands on deck" situation. We need a fully "interdisciplinary" approach.
Ultimately, what we most need is a type of "metanoia," a complete transformation of all of our expectations. Our current ecological footprints are several Earths over the limit (the limit is one). We won't be able to survive the coming catastrophe unless we can "do the math."
In this case, however, "doing the math" is not a problem for engineers, it is a human problem. That makes it, also, a spiritual problem, and (let me make it clear) a POLITICAL problem.
Ultimately, we are totally dependent on the World of Nature (that is the "one" world that the earth sciences students know about).
Most immediately, however, we live in a political world, and our key challenge is the political one, not the engineering one.
To Subscribe Just Click This Link
Image Credits:
https://www.mercurynews.com/2022/05/04/john-doerr-gives-1-1-billion-to-stanford-for-new-climate-school-largest-gift-in-stanford-history/