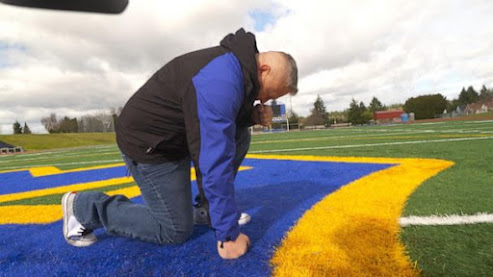 My title for today's blog posting is the title of a book by Anne Lamott: Help, Thanks, Wow. These are, Lamott says, the "three essential prayers." I have mentioned Lamott's book a couple of times before.
The picture at the top of today's blog posting (following that title) is intended to reference a column by Lamott, published in the July 11, 2022, edition of The New York Times. Lamott's column was titled, "I Don't Want to See a Football Coach Praying at the 50-Yard Line." Lamott is becoming somewhat of an expert on prayer. She is pretty much on target, too, the way I see it.
In her recent column, Lamott quickly disposes of her feelings about that Prayer on the 50-Yard Line gambit - a behavior that has been given Constitutional protection, as I assume you know, by the United States Supreme Court. If you don't understand the controversy, a New York Times' opinion column by Pamela Paul will make things clear.
Here's Lamott's quick take:

Many of us who believe in a reality beyond the visible realms, who believe in a soul that survives death, and who are hoping for seats in heaven near the dessert table, also recoil from the image of a high school football coach praying at the 50-yard line.

It offends me to see sanctimonious public prayer in any circumstance — but a coach holding his players hostage while an audience watches his piety makes my skin crawl.

As I said, above, I think that Lamott's judgment about this is right on target. Besides helping to disseminate Lamott's evaluation of Coach Joseph Kennedy's public piety, which is worthwhile in and of itself (this is something not to do, even if you do have a Constitutional right to do it), I wanted to expose anyone reading this blog to the rather sensitive and self-deprecatory way that Lamott talks about God. If you can penetrate The Times' paywall (I can provide no assurances, unfortunately), I recommend you read Lamott's column.
Those who "believe in a reality beyond the visible realms" often want to use that belief as a way to gain some sort of advantage in the here and now. I'd say Coach Kennedy is among their number. It's not a good look!
In fact, Lamott's way of describing how to live with faith and belief really resonates with me, and I commend it to you. Among other things, Lamott suggests taking a walk as a kind of (very non-ostentatious) prayer. Fact is, I have stumbled upon this technique myself. It's recommended!
To Subscribe Just Click This Link
Image Credit:
https://abcnews.go.com/US/video/supreme-court-hears-high-school-football-coach-prayer-84301866