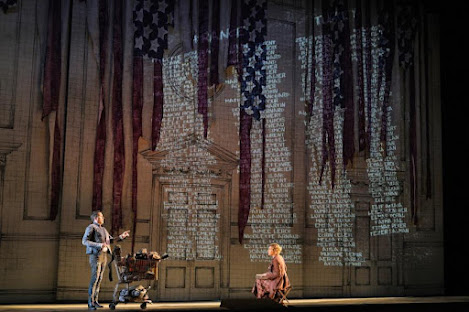 In the Sunday, July 3, 2022, edition of The New York Times Book Review, Peter Sagal commented on a recent book by Mark Clague, O Say Can You Hear?: A Cultural Biography of "The Star-Spangled Banner."
As Sagal's review notes, the question posed in the very last verse of our national anthem has preoccupied Americans from the beginning:

O say, does that star-spangled banner yet wave
O'er the land of the free
And the home of the brave?

It seems particularly appropriate to contemplate this question once again, as we end the week that began with our Fourth of July holiday.
How are we doing?
Oddly enough (witness the picture at the top of this blog posting), I found that this critical question - posed in that last verse of the "Star Spangled Banner" - was also posed by the San Francisco Opera, in its production of Don Giovanni. I attended the Opera's final performance of Don Giovanni on Saturday July 2nd, just one day before I read Sagal's review of Claque's new book, and I definitely took note of those tattered banners pictured. A review of the opera by Michael Zwiebach makes the reference clear:

As the orchestra plays the overture in San Francisco Opera’s new production of Don Giovanni, images of environmental devastation and bombed-out neighborhoods are projected on the façade of the American manor house that has been the central symbol in the company’s staging of all three of the Mozart/DaPonte operas. The house’s American flag bunting now hangs in tatters. The setting is a post-apocalyptic world, circa 2080, made from our own short-sightedness, insolence, and cupidity. In that, we’re like the Don himself, it seems.

O say, does that star-spangled banner yet wave?
Well, "YES." And "NO!" It's a pretty tattered piece of cloth.
But do we give it up? We might. That is a question. It's going to depend on the free and the brave.
And that means you and me!
To Subscribe Just Click This Link
Image Credit:
https://www.sfcv.org/articles/review/don-giovanni-faces-apocalypse-sf-opera