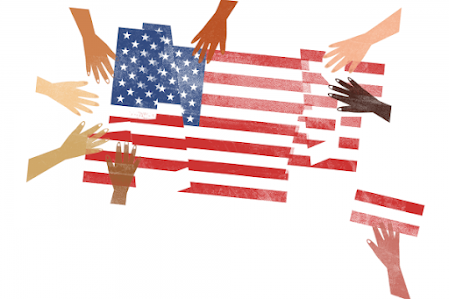 "Redemptive Patriotism" is the title of an article in the July 2022, edition of Sojourners Magazine. At least, that is the title borne by the article in the hard copy version of the magazine that showed up in my home mailbox.
I read the article in Sojourners shortly after having written my blog entry for July 4th, in which I proclaimed myself an "unabashed American patriot." Since I believe that professions of "patriotism" are properly suspect, I was happy to find that the article saw the Fourth of July holiday (and patriotism) exactly the way I portrayed them in my blog post yesterday:

It is imperative [says Sojourners - and me] that we resist destructive forms of patriotism that bleed into nationalism. Instead, we should embrace a redemptive patriotism that celebrates the noble promises the country was built upon, even while we acknowledge and repent for the ways the country has fallen so short of living up to those ideals and extending them to everyone.

Citing Frederick Douglass (in whose company I would be honored to be counted at any time),  and particularly Douglass' famous speech, "What to the Slave Is the Fourth of July?", Sojourners frames the Fourth of July, and "redemptive patriotism," this way:

The U.S. Constitution stated the mission of the framers as forming “a more perfect union,” which continues to be inextricably linked to building a more perfect democracy and a more just nation. This and every Fourth of July, let’s celebrate by rededicating ourselves to doing just that.

We have a whole year until the next Fourth of July comes around - and a major set of elections in the meantime. Let's each of see what we can do to redeem our patriotism between now and then!
To Subscribe Just Click This Link
Image Credit:
https://sojo.net/magazine/july-2022/frederick-douglass-prophet-isaiah-and-healthy-patriotism