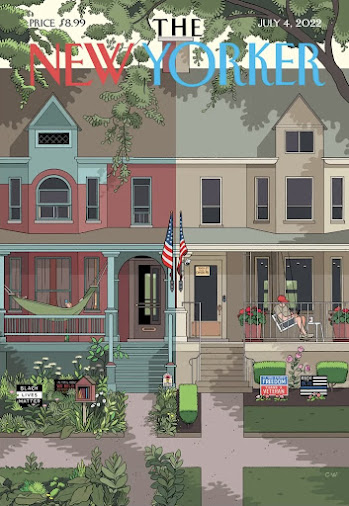 I was genuinely thrilled when I saw the cover on the July 4, 2022, edition of The New Yorker magazine. I have reproduced the cover art, above, and you can get a better view by clicking this link. I thought the cover image truly captured what our national holiday is all about. Red letters on the left. Blue letters on the right:

On the left, "Black Lives Matter," and one of those "In This House We Believe" signs, like the one on my own front lawn. On the right, an admonition to "Back The Blue," and to "Thank A Veteran."

In front of the house on the right, there is a plastic, artificial lawn. On the left, prolific natural growth - a pollinator's paradise.

On the left, there is a "Little Free Library." On the right, a home surveillance camera.

On both front porches, there is an American flag, and residents on both the left and the right are on their phones.

We may have different views, and concerns, but we are all Americans, here!

That is how I "read" the front cover image, which is by artist/cartoonist Chris Ware. That is the message I got when I just looked at the picture as I pulled the magazine out of the mail.
It may well be, though, that Ware didn't intend his image in quite the way I saw it. He titled the cover, "House Divided." I found that out when I opened up the magazine.
The magazine has published a brief little interview with Ware, in which he indicates some trepidation about the nation's future. Ware said, in fact, that he "was buoyed by the brief flirtation with reality that the January 6th hearings have resurrected in a sliver of the G.O.P., but now the Texas Republican party’s vote to adopt a platform that asserts the illegitimacy of Biden’s electoral victory makes it feel as if something very, very, very bad is about to happen."
Well, something "very, very, very bad" could be about to happen, and if Abraham Lincoln is right (and he was a pretty smart guy), "a house divided against itself cannot stand."
But let me suggest that the kind of divisions pictured in Ware's cover drawing are not the kind of "divisions" that mean our house "cannot stand." In fact, both the home on the left, and the home on the right, look pretty solid to me. We are "in this together," I hear them say, despite those different opinions and views about priorities and politics. This is exactly why I was cheered by the image.
I think we need to see our differences for what they really are: differences. Differences of opinion - not different truths! That's OK. Let's celebrate those differences, right? We have to learn to do that. Wait! Even better: we know how to do that!
All sides can fly the flag. That's what this picture tells us. We are all Americans here!
To Subscribe Just Click This Link
Image Credit:
https://www.newyorker.com/culture/cover-story/cover-story-2022-07-04