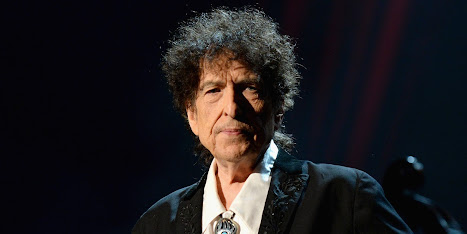 I was writing about Bob Dylan yesterday. And I was writing about Bob Dylan on the day before that, too. Well, why not? Let's make it three days in a row!
"Precious Angel" is another one of my favorite Bob Dylan songs. It is definitely included in my "Last Day" playlist. If you want to listen to "Precious Angel," you can click here for the official audio. The verse I keep coming back to is this one:
My so-called friends have fallen under a spell
They look me squarely in the eye and they say, “All is well”
Can they imagine the darkness that will fall from on high
When men will beg God to kill them and they won’t be able to die?
Right at the moment, I am positive in my own mind that "all is well" is not the right response to where we find ourselves today. "Precious Angel" is Dylan in his prophetic voice, and as Wikipedia tells us, the song is included on Dylan's 1979 album, Slow Train Coming, which was Dylan's first album following his conversion to Christianity. All was not well in 1979, either!
I have, from the start, always regarded Dylan as a "religious" songwriter, and I think that his music has consistently reflected his profound religious insights. While I was familiar with Dylan from the start of his career, I actually became a dedicated Dylan follower in 1967, when I first heard the songs on John Wesley Harding, the Dylan album released right at the end of that year. Virtually all of the songs on that album are "religious," at least the way I hear them, and I have found religious themes in virtually everything that Dylan has ever done. Lots of people don't see Dylan that way, of course, but my view of Dylan's life and career sees him as pursuing a religious vocation, right from the very beginning.
I was delighted, thus, just a few weeks ago, to pick up a copy of Ian Bell's 2013 book on Dylan. Bell's book is titled, Time Out Of Mind: The Lives Of Bob Dylan, and it reinforces my thoughts about Dylan's religious commitments and preoccupations. Bell directly confronts those who would treat songs like "Precious Angel" as some kind of weird departure from the "real" Dylan. Not so says Bell, on pages 25-26:

Oddly, perversely, his fans and critics would in later years treat Dylan's involvement with evangelical Christianity as a kind of phase, as though the artist had taken a holiday from himself. Somehow ignoring a host of songs over better than three decades, they would study the small print and ignore the contract, concluding - the relief was palpable - that he had got the thing out of his system with three quick albums, 1979 to 1981, before returning to 'secular music', his true calling. Of all the nonsense ever talked about Dylan, this error counts as monumental. Given the artist's habit of delivering statements of faith, albeit reluctantly, whenever he is pressed on the matter, given the apocalyptic imagery that runs through song after song, given that many of those songs are impossible to understand if you discount religious belief, calling Dylan 'secular' is like calling the Dalai Lama a careers adviser. This artist cannot be understood without his God. Church membership is neither here nor there.

He was a religious writer for much of the 1960s, though it took a while for most people to notice. By the beginning of the 1980s, he had come to occupy a precise area in the unending realm of faith. Most followers of the major religions would consider Dylan's beliefs to be paradoxical. Some would call them nonsensical, others blasphemous. His statements and his songs nevertheless support a simple description. He remains a Jew, but a Jew who accepts Jesus and believes, furthermore, that Christ will return any time now. Fireworks and more will follow. Dylan is, as these things are described, a messianic Jew.

This evening, I am scheduled to head off to hear Bob Dylan play in Oakland. I think it is pretty unlikely that he will play "Precious Angel" (or even "Mississippi," for that matter, the song I talked about yesterday). Whatever songs Bob plays, though, I am willing to bet that there won't be any message that "all is well."
Local friends might still be able to get tickets to hear Bob play at the Santa Cruz Civic Auditorium, on Thursday, June 23rd! Just click that link!
To Subscribe Just Click This Link
Image Credit:
https://pitchfork.com/features/podcast/bob-dylans-new-album-is-his-latest-of-many-comebacks/