#161 / General Flynn And His Autocratic Proposals 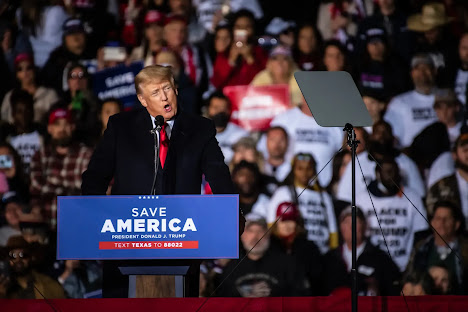 In yesterday's New York Times, the paper sought to prepare its readers for the televised Congressional hearing scheduled for that day, which hearing was intended to acquaint the American people with what the House Committee investigating the events of January 6, 2021, has been able to find out.
The longest of The Times' articles was titled as follows in the hard-copy version of the paper: "Inside Trump's Battle to Stay In Office." Online, the hard-copy version of what The Times printed was reconfigured, and the picture above came from a smaller, individual article, with an online headline as follows: "Trump Had Role in Weighing Proposals to Seize Voting Machines."
As I read the paper on Thursday morning, I learned that General Michael Flynn had advised President Trump that he "could immediately on his order seize every single voting machine in the country."
As The Times so accurately noted, this kind of behavior is "associated with autocracies."
One of the philosophical (and practical) underpinnings of American democracy is the so-called "federal principle," in which governmental powers are dispersed, not concentrated. It is not by chance that The Federalist Papers is the title given to a collection of the arguments that helped persuade the American revolutionaries who had just displaced an autocratic monarch to trust the new government proposed in the Constitution.
Let's not forget that the "federal principle" is, in fact, what does help protect our democracy from despots, and that we need to keep governmental power dispersed! When the nation accepts the idea that any one person (President or General) can "seize every single voting machine in the country," our democratic goose is most definitely and disastrously cooked.
Having our national elections machinery actually operated by state and local officials, all of whom cannot be compromised simultaneously, is a really, really important "check and balance" on autocratic tendencies. The fact that our former president is a clinical specimen of such autocratic tendencies indicates that the potential disaster of an autocratic chief executive is "real," not hypothetical.
I am looking forward to the people having a chance to consider what the January 6th Committee has found. Hopefully, David Brooks (also writing in The New York Times, yesterday) is not correct in his claim that "The Jan. 6 Committee Has Already Blown It."
To Subscribe Just Click This Link
Image Credit:
https://www.nytimes.com/2022/01/31/us/politics/donald-trump-election-results-fraud-voting-machines.html