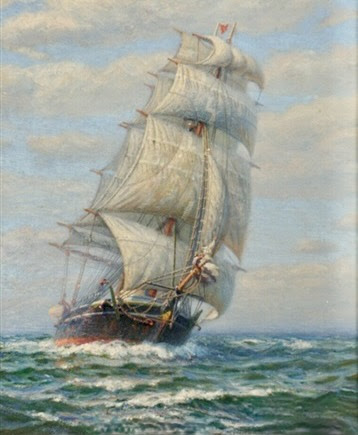 Below, I am sharing my favorite verse from one of my very favorite Bob Dylan songs, "Mississippi." I find, looking back, that I first mentioned this verse in a blog posting on May 16, 2010. I have, in other words, been thinking about this verse, and about this song, for a pretty long time. As I wrote about the verse in 2010, I linked the verse to my understanding of "gratitude."
My previous reading of Dylan's verse still works for me, and I still stand by it. Just the other day, however, as I was pushing hard to get to a meeting, walking into the face of a powerful wind, it suddenly struck me that there is another way to understand what Bob Dylan is talking about. The ship he claims as "his" is not an individual vessel, but our "Ship of State."
Well my ship’s been split to splinters and it’s sinking fast
I’m drownin’ in the poison, got no future, got no past
But my heart is not weary, it’s light and it’s free
I’ve got nothin’ but affection for all those who’ve sailed with me
The "Ship of State" metaphor is a familiar one, first articulated, according to Wikipedia, by Plato. As Wikipedia discusses the metaphor, and I am sure properly represents Plato's idea, the focus is on the "captain," who is in charge of the ship. The governance of the state is being compared to the command of the vessel.
There is another way, of course to understand the metaphor. This would be a more "democratic" reading. It could be that the "Ship," not the commander of the Ship, should be seen at the center. In this reading, all of us, together, constitute the "Ship of State." We are the ship. The focus is not on who is steering the ship, but on the composition of the ship, its "constitution," if you will.
I have not spent the time necessary to hunt down historical evidence, bolstering my idea that the "Ship of State" metaphor, in American history, has basically been about our coming together, as citizens, to sail forward into the future, to go where we choose, to move ahead as the "winds of freedom blow." That last phrase, by the way, is the official motto of my alma mater, though Stanford University utilizes German, not English, to assert the importance of the phrase: "Die Luft der Freiheit weht" / "The Wind of Freedom Blows."
If we think about our "Ship of State" as the nation itself, of which we are all a part, and if we assume that Dylan had this thought in mind, or partly in mind, as he wrote down the words of "Mississippi," we can immediately see that this reading of the verse has Dylan lamenting our economic, social, and political breakdown, the loss of national unity.
Our ship has been "split to splinters," Dylan says, and..... "it's sinking fast."
This reading provides a rather accurate statement of where we are, right now, in the United States of America. We are all "individuals," it seems, not feeling bound together, at all, in national unity - not sensing, as in earlier, historic epochs of American history, that we are "together in this." Because we have splintered, we are doomed to go down.
Whether or not that was Dylan's intended meaning, it is certainly a meaning that resonates with me, and that depicts, in metaphor, the situation in which we find ourselves today.
But reconciliation, not rage, is what Dylan advises:
My heart is not weary, it’s light and it’s free.
I’ve got nothin’ but affection for all those who’ve sailed with me.
This is a recommendation I make, too.
Cannot we all work to summon up those mystic chords of memory that have bound us together? Cannot we, as Lincoln told us that we must, bind up our wounds, and be reunited once again?
As we sail, we sail together, and if we go down, then, as in Dylan's "Tempest," his song about the RMS Titanic, there will be only a few of us who will survive. That "Ship of State" metaphor: It rings so true to me! It makes me want to shout, so everyone can hear:
Oh Ship of State, Sail On, Sail On!
To Subscribe Just Click This Link
Image Credit:
http://www.artnet.com/artists/james-gale-tyler/full-rigged-ship-under-sail-in-open-seas-UWr-D8hAVCCrniRQe_kNiA2