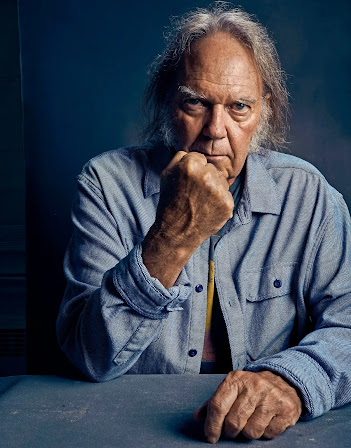 On Sunday, February 13, 2022, The New York Times ran an opinion piece written by Bill McKibben and Akaya Windwood. McKibben is pretty well known. He is a nature writer and a climate activist, and the founder of 350.org, a nonprofit organization working to combat global warming and climate change. McKibben was born in 1960, by the way, and thus is considered to be a "Boomer."
Windwood, it appears, is a principle consultant at Windwise, LLC, which seems to be a consulting company, and not the company, by the same name, that seeks to provide its customers with the very best in windsurfing experiences.
The guy pictured above has nothing to do with either company, as best I can tell, though the picture accompanies the McKibben/Windwood article. I assume that this photograph was included to help illustrate the main point in the McKibben/ Windwood opinion editorial:
Boomers Should Fight for Change
Let it be noted, by way of a gentle correction, that Neil Young (the guy pictured) was born in 1945, which means that he is not, really, a "Boomer," at least not if you believe the Wikipedia chronology. Young, like me, is a pre-Boomer. On the other hand, that headline above copies the headline in the hard-copy version of The Times. If you click on the link, you'll find that the online headline is different: "Call It ‘Codger Power.’ We’re Older and Fighting for a Better America." Codgers we are, Neil Young and I! Many who read this blog posting are probably also in that category.
I was struck by the "Boomers Should Fight for Change" headline because I have never forgotten the lesson of Generations: The History of America's Future, 1584 to 2069. That book, by William Strauss and Neil Howe, has been mentioned in this blog on earlier occasions, and let me just copy, here, a paragraph from my first mention of the book, in 2015:

Strauss and Howe also identify a "Millennial" generation, and they say their research on past generations leads them to expect a "crisis lasting from 2013 to 2024." They say "the early 2020's appear fateful," and that they expect Malloch's "next Great Generation," the Millennials, will have "a chance to demonstrate civic virtue and to triumph over great adversity."

As noted, Neil Young and I aren't the only "codgers" around. I take it as a kind of fulfillment of the Strauss and Howe prediction that we, members of an earlier generation, are now being actively solicited to take part in a social change movement that will allow civic virtue to triumph over great adversity.
I do think that "something is happening here," and that "we don't know what it is," and that as Bob Dylan puts it in another song - in what is probably my favorite song, Mississippi - "things should start to get interesting right about now!"
Here is what McKibben and Windwood have to say about that:

What really should scare the corporate and political bad actors is the prospect of old and young people connecting, because there is real power if we work across generations. Last fall, young activists called for demonstrations outside the fossil-friendly big banks, and they invited us to join in. We did, with a certain amount of gallows humor (“Fossils against fossil fuels” read one banner in Boston). And by the end of this week, younger artists were joining in the Spotify boycott. The soul singer India Arie and the podcaster Roxane Gay, both 40-somethings, had pulled their work, too.

This particular dust-up won’t be a decisive battle in the struggle for a better America and a better planet; in fact, there may not be any decisive battles, just a long series of skirmishes that must be engaged by the young but also by the old. We may be nearer the exit than the entrance, but we’re in this fight for the long haul.