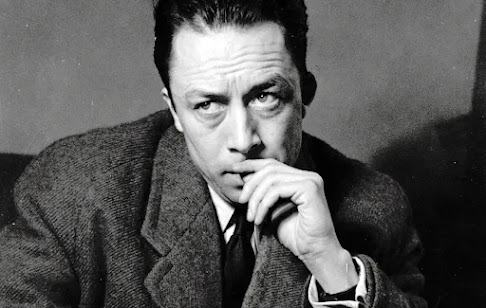 That's Albert Camus, pictured above. He won the Nobel Prize for Literature in 1957.
I get weekly bulletins from Maria Popova, in an online publication that she calls The Marginalian, though her observations are certainly not "marginal," at least to my way of thinking.
In a bulletin I received on Sunday, March 20, 2022, Popova referenced Camus, and specifically highlighted the following statement, which comes from Camus' book, The Rebel:

Real generosity toward the future lies in giving all to the present.

That link I just provided (which comes from Popova's recent bulletin) will take you to an earlier edition of The Marginalian, where Popova also discusses Camus, and where I got the picture.
The burden of Camus' observation about present and future is meant to be a warning that an appeal to forgo justice today, in order to achieve justice in the future, is always an illegitimate proposal. What Camus said struck me mainly because it is a modern rendition of the statement made by George Fox, the first Quaker, whose observation I never tire of repeating:

If we could ever find it within ourselves to come fully alive, right now, in the moment in which we now live - the only moment in which we have an opportunity to take action - we would know, indeed, what it truly means to be alive, and to be free. It is in the present, the moment in time we share right now, that all possibility is encountered.
Our reverence and respect for the past - often so much merited - is similar to that abundant and overflowing generosity we so frequently, and so properly, feel toward the future. The truth is, though, that we are alive, and only fully alive....
Right now.
Right here.
Right now.
Image Credits:
https://www.themarginalian.org/2016/06/17/albert-camus-the-rebel/
To Subscribe Just Click This Link