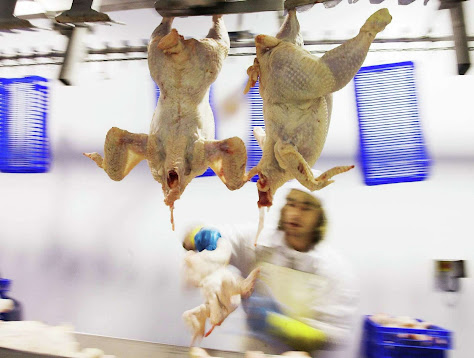 My heart is cheerful, it’s never fearful
I been down on the killing floors
-Bob Dylan
Soon After Midnight
An "Open Forum" column that appeared on the editorial pages of the San Francisco Chronicle on Tuesday, March 22, 2022, was titled, "Endless killing changed me forever." It is a powerful statement. I am reprinting it, in its entirety, below.
It strikes me that we need to reevaluate what we have come to take for granted. In so many ways, we seem to have organized our lives, and the way the world works, around "endless killing." The column by Susana Chavez provides one example. There are lots of others, of course!
The last verse in the Bob Dylan song I featured at the top of this blog posting begins with the following words:

It's now or never
More than ever

I think that's the truth!
oooOOOooo
ENDLESS KILLING CHANGED ME FOREVER
Growing up in Mexico City, my first job as a teenager was slitting the throats of chickens at a slaughterhouse. I started off as a “peeler.” I would pluck the feathers from their bodies as they came to me on the line. About 2% of the time, they would still be alive, still moving. Later, I moved on to a new role: cutting throats, which I did 700 to 800 times during my shift from 3 a.m. to 7:30 a.m. before heading to school at 8:30 a.m.

I was mostly numb to the killing. I didn’t recognize that each of those animals was an individual with a rich emotional life of their own. Occasionally, however, I would recognize their desperate eyes as they would look at me. But in order to do my job, to get through the day, I couldn’t care. It wasn’t until decades later, when I saw a video online of a chicken being killed that I came to grips with the disturbing reality of mass killing.

Many of us are concerned with the needless suffering of animals in industrialized animal agriculture, but the human cost of mass slaughter is just as troubling. I have two children and two grandchildren now, and I wouldn’t want any of them working in a slaughterhouse. But if not my children, then whose children will be asked to do this work?

In addition to being the most dangerous profession in the United States, a 2016 study showed that slaughterhouse workers face higher rates of psychological distress compared to the general population. It is unnatural and inhumane for someone to kill for hours every day. The lasting trauma experienced by slaughterhouse workers is similar to that faced by combat veterans and disaster survivors and leads to high rates of drug and alcohol abuse, and domestic violence.

I experienced this firsthand: My boss and co-workers resorted to drugs and alcohol consumption after their shifts. My boss’s wife hid her black eyes behind dark sunglasses. We all directed our attention away from her plight: The abuse she was facing at the hands of someone who was supposed to care for her — the same way we had to ignore the animals we were charged with killing.

If compassion were a muscle, this work we did left it weak and atrophied.

We kill 9.5 billion animals in the United States every year, and behind the death of each one of those animals is someone forced to become numb to perform this inherently violent task. The rest of us avert our eyes. We say we care so much about where our food comes from while being shielded from the dark reality of its production.

Will we continue to increase our consumption of animals and rely on a system that requires people to kill for hours on end to feed our planet?

I certainly hope not. And we don’t have to accept the status quo.

A new bill, AB2764, introduced by Assembly Members Adrin Nazarian, D-Los Angeles, and Alex Lee, D-San Jose, would halt the construction and expansion of factory farms and slaughterhouses in California.

No doubt, future generations will look back in horror at our treatment of humans and animals. We need to create a kinder food system, one where we protect the vulnerable and foster compassion. This is the world we should all want for my grandchildren.
Susana Chavez was born in Mexico City and moved to California as a teenager. She is an elected member of the Core leadership team of Direct Action Everywhere (DxE), a global grassroots network with the goal of achieving revolutionary social and political change for animals in one generation.
oooOOOooo
Soon After Midnight, Live
To Subscribe Just Click This Link
Image Credit:
https://www.sfchronicle.com/opinion/openforum/article/My-first-job-was-slitting-the-throats-of-chickens-17017934.php