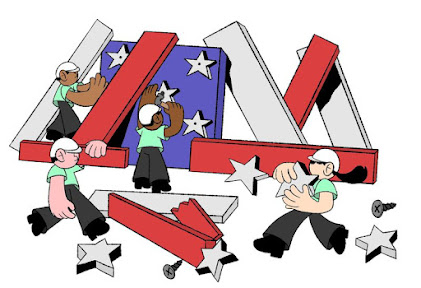 Ezra Klein is a one-time Banana Slug. That means, for any out-of-Santa-Cruz-County readers, that Klein was once a student at the University of California, Santa Cruz. Currently, Klein is working as an opinion columnist for The New York Times, and as a podcaster on Apple Podcasts.
On January 16, 2022, The Times' "Sunday Review" section devoted its entire last page to Klein's essay, "Steve Bannon Is On to Something."
Most of us know Bannon, pictured immediately below, as a thuggish associate of former president Donald J. Trump. Bannon remains thuggishly-involved in Republican Party politics, when he is not dodging subpoenas from the Congressional Committee investigating the invasion of the U.S. Capitol Building on January 6, 2021 (in which invasion, it appears, he may have had some significant involvement). 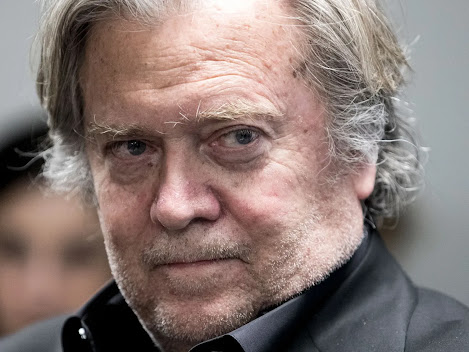 So, what is Bannon "on to," as Klein puts it?
Well, Klein says that Bannon is "on to" the fact that political efforts at the local level are profoundly important. I would like to think that Klein's appreciation of this political truth might be tied, at least in part, to Klein's two-year residence in Santa Cruz, but I can't swear that's true. My own twenty years as a local government official, in Santa Cruz County, does validate Klein's insight (and Bannon's).
Here is what Klein says in The New York Times (emphasis added):

Hidalgo didn’t campaign as a firebrand progressive looking to defend Texas from Trump. She won it, she told me, by focusing on what mattered most to her neighbors: the constant flooding of the county, as violent storms kept overwhelming dilapidated infrastructure. “I said, ‘Do you want a community that floods year after year?’” She won, and after she won, she joined with her colleagues to spend $13 million more on election administration and to allow residents to vote at whichever polling place was convenient for them on Election Day, even if it wasn’t the location they’d been assigned.

Protecting democracy by supporting county supervisors or small-town mayors — particularly ones who fit the politics of more conservative communities — can feel like being diagnosed with heart failure and being told the best thing to do is to double-check your tax returns and those of all your neighbors.

Or you can simply win one yourself. That’s what Gabriella Cázares-Kelly did. Cázares-Kelly, a member of the Tohono O’odham Nation, agreed to staff a voter registration booth at the community college where she worked, in Pima County, Ariz. She was stunned to hear the stories of her students. “We keep blaming students for not participating, but it’s really complicated to get registered to vote if you don’t have a license, the nearest D.M.V. is an hour and a half away and you don’t own a car,” she told me.

Cázares-Kelly learned that much of the authority over voter registration fell to an office neither she nor anyone around her knew much about: the County Recorder’s Office, which has authority over records ranging from deeds to voter registrations. It had powers she’d never considered. It could work with the postmaster’s office to put registration forms in tribal postal offices — or not. When it called a voter to verify a ballot and heard an answering machine message in Spanish, it could follow up in Spanish — or not.

“I started contacting the records office and making suggestions and asking questions,” Cázares-Kelly said. “I did that for a long time, and the previous recorder was not very happy about it. I called so often, the staff began to know me. I didn’t have an interest in running till I heard the previous recorder was going to retire, and then my immediate thought was, ‘What if a white supremacist runs?’”

So in 2020, Cázares-Kelly ran, and she won. Now she’s the county recorder for a jurisdiction with nearly a million people, and more than 600,000 registered voters, in a swing state. “One thing I was really struck by when I first started getting involved in politics is how much power there is in just showing up to things,” she said. “If you love libraries, libraries have board meetings. Go to the public meeting. See where they’re spending their money. We’re supposed to be participating. If you want to get involved, there’s always a way.”

So, be advised! Klein and Steve Bannon are definitely "on to something!"
Image Credits:
(1) - https://the-dots.com/users/brian-scagnelli-824827
(2) -  https://www.newyorker.com/humor/borowitz-report/bannon-caught-fleeing-us-disguised-as-man-who-recently-took-shower
To Subscribe Just Click This Link