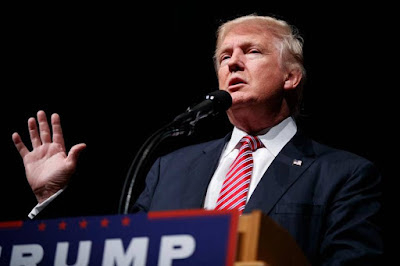 I recently revisited one of my old blog postings, dated August 5, 2016. My blog posting was headlined, "Sore Loser," referring to an article, referenced in the blog posting, that had used that term. I came across that old blog posting more or less by chance, and I was surprised to see what I had written. My main focus was to highlight the efforts that candidate Trump was then making to discredit the 2016 presidential election in advance. Why would he do that? Well, just in case he lost. Here is a brief excerpt from what I wrote back then:

In an article that ran in The San Jose Mercury News on Thursday, August 4th [2016], Michael Doyle and William Douglas of the McClatchy Washington Bureau observed that Republican Presidential candidate Donald Trump is apparently laying the ground for a post-election challenge to the results of the November election (presuming he isn't declared the winner in that election, of course):

Let's be clear; this isn't about being a "sore loser," as the news article suggests. For the Trump campaign to make the statement (through an intermediary, admittedly) that there will be a "constitutional crisis" and "civil disobedience" if Donald Trump doesn't win the election in November is extraordinarily concerning.

This statement tells me that Trump's claim that the election is "rigged," a claim he has already made, may be used to destabilize our democracy, should Trump not win. Some have already identified Trump as a candidate who seems devoted to a totalitarian or "fascist" approach to government, in which he believes that "he alone" can solve the nation's problems.

If Trump loses, in what will the predicted "constitutional crisis" consist? What kind of "civil disobedience" is being forecast? Will armed groups of thugs, encouraged by Trump, attempt to disrupt the transition to a Hillary Clinton presidency, despite an election that finds her the electoral victor?

Our pride, as a nation, has always been that after an election there is an orderly and peaceful "transfer of power" to a new governmental administration, and a transition that occurs without violence, however filled with tension the election itself might have been, and despite claims - and even justified claims - of irregularities in the election process. The concession of Al Gore to George W. Bush, in 2000, is an example from recent history.

If Donald Trump is suggesting that this pattern of democratically directed transition should or would be broken, if Trump loses in November, then we all have much to be concerned about (emphasis added).

As we know, candidate Trump didn't lose that 2016 election. Instead, he became President Trump, so he didn't need to proclaim a "constitutional crisis" and call for "civil disobedience."
But wait a minute! Fast forward four years. While candidate Trump didn't lose the election in 2016, he did lose the 2020 election, and everything that has happened, subsequently, is exactly what his campaign spokespeople said would happen when they were making speeches about supposed "voter fraud" four years earlier, in 2016.
I had truly forgotten all about those 2016 statements until I read my old blog posting. Why was I surprised by the events of January 16th? Only because I had forgotten what Trump and his supporters were saying four years earlier. I don't think I'm the only one who forgot!
In a way, it's comforting, of course, that Trump's post-election efforts to discredit the 2020 election are just a replay of a game plan he first advanced in 2016. Nothing new, here, we can tell ourselves, so nothing we can't deal with. That is one way of looking at it. In another way, though, it is profoundly disturbing that Trump and his allies were plotting in 2016 to mount the kind of effort we are now seeing in 2020, 2021, and 2022. That lends credence to the idea that the "protests" on January 16th weren't some kind of political demonstration that "got out of hand," but a step in the enactment of a long term plan to take over the government, using false claims of "voter fraud" as the "cover story."
Trump's plan to disrupt the democratic transfer of power to the rightfully elected president was not needed after the 2016 election, and ended up failing after Trump lost in 2020. However, it does seem that a "third try" is proceeding, as some observers have noted.
Do Donald Trump and his supporters actually have a deeply thought-through plan to supplant our system of democratic elections, and are they still working on it? Check out what I wrote back then (which did criticize some Democrats, as well as Donald Trump). See if it doesn't give you just a little case of the shivers.
Image Credit:
http://www.mcclatchydc.com/news/politics-government/election/article93542162.html
To Subscribe Just Click This Link