#67 / Eco-Anxiety And The Psychiatric Couch* 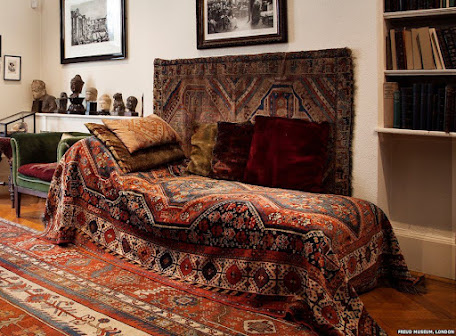 In case you haven't heard, "Eco-Anxiety" is a real thing. An extensive article in the February 7, 2022, edition of The New York Times has spelled it all out in detail - "Climate Change Enters the Therapy Room":

PORTLAND, Ore. — It would hit Alina Black in the snack aisle at Trader Joe’s, a wave of guilt and shame that made her skin crawl.

Something as simple as nuts. They came wrapped in plastic, often in layers of it, that she imagined leaving her house and traveling to a landfill, where it would remain through her lifetime and the lifetime of her children.

She longed, really longed, to make less of a mark on the earth. But she had also had a baby in diapers, and a full-time job, and a 5-year-old who wanted snacks. At the age of 37, these conflicting forces were slowly closing on her, like a set of jaws.

In the early-morning hours, after nursing the baby, she would slip down a rabbit hole, scrolling through news reports of droughts, fires, mass extinction. Then she would stare into the dark.

It was for this reason that, around six months ago, she searched “climate anxiety” and pulled up the name of Thomas J. Doherty, a Portland psychologist who specializes in climate.

Back in 1963, when Bob Dylan landed on that psychiatric couch, the looming danger of nuclear war was causing significant anxiety in the public at large. While recent events make clear that anxiety about the potential for an upcoming nuclear World War III continue to be justified, it is not at all surprising that psychiatrists are starting to hear from patients with anxiety about the Climate Crisis. Alina Black is definitely not the only one.
There is, by the way, a fair degree of similarity between the "Climate Crisis," and the pending possibility of nuclear war. Both would be horrific, and both would likely end life as we know it, and it seems to most people that there is very little that they can do about either one. That does tend to make one anxious.
Instead of heading for the psychiatric couch, though, to deal with our contemporary anxieties related to nuclear war and/or global warming, let's consider the alternatives.
A typical therapeutic approach is focused individually. Alternatively, what if we decided to deal with our anxiety as a "political" problem, instead of as a problem of personal anxiety? If we'd like to keep the psychiatric metaphor in play, we could call it "group therapy," but what we really need to do is to get together with others, in small groups, and then to take the political actions that will change the conditions that are making us anxious.
Some time ago, I quoted Katharine Hayhoe to the effect that our feelings of powerlessness stem from our failure to recognize that our individual (and thus very small) actions do, in fact, help change the world. People doubt that, but our actions do change things - and that is all the more true when we start getting together to do something about the anxiety-creating conditions we see all around us.
To use Hayhoe's metaphors, we can each individually reduce our climate "footprint," but even more important, we can make our impact "shadow" larger when we join with others in the kind of collective action that is always how we are best able to create a new reality, and to change the world we live in now.
It is definitely time for a change!
To Subscribe Just Click This Link
Image Credit:
https://www.bbc.com/news/magazine-33079041
* Talkin' World War III Blues
I said, “Hold it, Doc, a World War passed through my brain”
He said, “Nurse, get your pad, this boy’s insane”
He grabbed my arm, I said, “Ouch!”
As I landed on the psychiatric couch
He said, “Tell me about it”