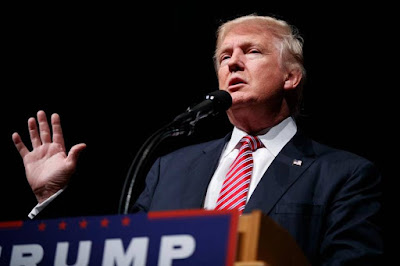 In an article that ran in The San Jose Mercury News on Thursday, August 4th, Michael Doyle and William Douglas of the McClatchy Washington Bureau observed that Republican Presidential candidate Donald Trump is apparently laying the ground for a post-election challenge to the results of the November election (presuming he isn't declared the winner in that election, of course):

Let's be clear; this isn't about being a "sore loser," as the news article suggests. For the Trump campaign to make the statement (through an intermediary, admittedly) that there will be a "constitutional crisis" and "civil disobedience" if Donald Trump doesn't win the election in November is extraordinarily concerning.

This statement tells me that Trump's claim that the election is "rigged," a claim he has already made, may be used to destabilize our democracy, should Trump not win. Some have already identified Trump as a candidate who seems devoted to a totalitarian or "fascist" approach to government, in which he believes that "he alone" can solve the nation's problems.

If Trump loses, in what will the predicted "constitutional crisis" consist? What kind of "civil disobedience" is being forecast? Will armed groups of thugs, encouraged by Trump, attempt to disrupt the transition to a Hillary Clinton presidency, despite an election that finds her the electoral victor?

Our pride, as a nation, has always been that after an election there is an orderly and peaceful "transfer of power" to a new governmental administration, and a transition that occurs without violence, however filled with tension the election itself might have been, and despite claims - and even justified claims - of irregularities in the election process. The concession of Al Gore to George W. Bush, in 2000, is an example from recent history.

If Donald Trump is suggesting that this pattern of democratically directed transition should or would be broken, if Trump loses in November, then we all have much to be concerned about.

However, this is not just a "Trump" problem. It is only fair to highlight very similar concerns about what has been said on the Democratic Party side. Both Leon Panetta and Joe Biden suggested, at the Democratic National Convention, that an election result that gave the presidency to Donald Trump was so unacceptable that it could not be abided.

Let me talk about something that I am deadly serious about. This is a complicated and uncertain world we live in. The threats are too great, the times are too uncertain to elect Donald Trump as president of the United States. Let me finish. No major party nominee in the history of this nation has ever known less or has been less prepared to deal with our national security. We cannot elect a man who exploits our fears of ISIS and other terrorists, who has no plan whatsoever to make us safe, and man who embraces the tactics of our enemies: torture, religious intolerance.

Saying "should not" would have been a correct use of language - and boy, do I agree! But "cannot?" Let me give Joe and Leon a little lesson in democracy. Donald Trump CAN, indeed, become our commander in chief, if the voters elect him to be the next President of the United States. Donald Trump CAN be elected, if he wins in November.

I was at the Convention, and I personally heard Leon Panetta make the statement that Donald Trump "cannot" become our commander in chief. That statement, and Joe Biden's similar statement, and Biden's claim that "America owns the finish line," were the three most disturbing statements made at the Convention, in my opinion. The horrible speech of General John Allen, promising that American bellicosity would know no bounds, ever, was a close runner up.

Leon Panetta and Joe Biden are Hillary Clinton's intermediaries and spokespeople, just as surely as Roger Stone is Trump's intermediary and spokesperson. For both the Clinton and Trump campaigns to suggest that the election results in November will not be respected if their chosen candidate loses makes my blood run cold.

I supported Bernie Sanders, not Hillary Clinton. I don't want Donald Trump to be President. Let me say, though - and let me urge anyone who might read this to be of like mind - that the principles of American democracy are too precious to be set aside because the "wrong" candidate wins, the candidate of the other party. Between now and November, the nominated candidates are going to contest an election. Candidates for President have been doing that for over two hundred years.