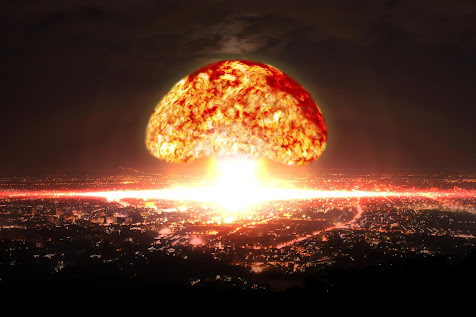 I confess to having somewhat of a soft spot for Wall Street Journal columnist Peggy Noonan. Noonan is definitely on the "right wing" of the political spectrum, and was a speechwriter for one of the nation's most destructive presidents, Ronald Reagan. Noonan's politics are not my politics, by any means. Still, I find Noonan to be reasonable, for the most part, and I appreciate it when her columns take positions that I think we all ought to agree with. That does happen, not infrequently.
As an example, Noonan's most recent column, published on the Opinion page of the Saturday/Sunday, January 29-30, 2022, edition of The Wall Street Journal, suggests that the United States ought to be "careful" as it confronts the possibility of war in the Ukraine.
Noonan's column was titled, "The Ukraine Crisis: Handle With Care," and contained the following observation:
We don’t worry enough about nuclear weapons.
Noonan carried on to say, about the potential of nuclear war, that we are "used to being lucky," but that "luck is a bad thing to get used to."
I would like to think that we might all agree with Noonan's observations on the topic of nuclear weapons. If we do agree, then we should be pushing for the United States to lead the world in reducing (and then eliminating) the various stockpiled nuclear weapons that the United States, and other nations, have cached in various locations throughout the entire world - including in the Ukraine, as I read Noonan's column.
If we did that, if we could get rid of all those nuclear weapons, we wouldn't have to trust our luck!
Image Credit:
https://scitechdaily.com/study-shows-more-than-100-million-dead-if-india-and-pakistan-wage-nuclear-war/
To Subscribe Just Click This Link