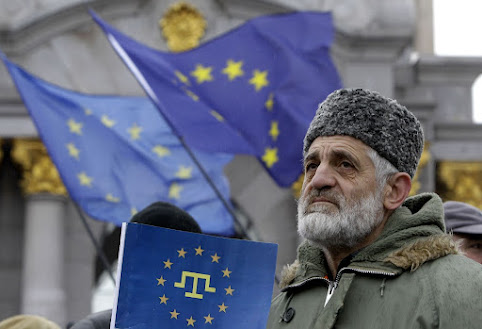 My headline for this blog posting comes from an article in The Wall Street Journal, "Why Ukrainians Are Prepared to Fight," authored by  Dr. Marci Shore, an Associate Professor of History at Yale University, and the author of The Ukrainian Night: An Intimate History of Revolution, published by Yale University Press in 2018. In this article, Dr. Shore told about her contact with two young women in Ukraine whom she knows:

As Vladimir Putin was ostentatiously amassing troops on the border, I ... sent an email to two journalist friends in Kyiv:

“We’re always mobilized,” one wrote back, “and ready to work, whatever comes.”

These women are still young, yet between them they have covered war and revolution in their own country, Belarus, Egypt and Iraq. Born around the time of the 1986 Chernobyl disaster, they come from a country that has been through a lot.

During World War I, the Bolshevik Revolution and the civil war that followed, Kyiv was occupied by five different armies. In the 1930s, Stalin engineered a famine that killed more than three and a half million Ukrainians. Then came the Great Terror, World War II, Nazi occupation, the Holocaust, ethnic cleansing, mass deportation to the Gulag, nuclear catastrophe. When the U.S.S.R. dissolved in 1991, Russia became its successor state; Ukraine and 13 other constituent Soviet Republics became newly independent states. In Ukraine, years of corruption, gangsterism and oligarchy followed.

In 2004, the former Soviet republics in the Baltics—Latvia, Estonia and Lithuania—joined both the European Union and NATO. By then it was clear that a Russia ruled by Mr. Putin would resist any attempt by Ukraine (a country with a population more than seven times that of all three Baltic states combined) to follow their path. In that year’s Ukrainian presidential election, the Kremlin supported Viktor Yanukovych —a criminal with robbery convictions, who used election fraud and dioxin poisoning of his chief opponent to claim victory. In protest, thousands of Ukrainian citizens gathered on the Maidan Nezalezhnosti, Kyiv’s Independence Square, in what became known as the Orange Revolution.

For three weeks they froze, resolutely—and victoriously. New elections the following month brought their preferred, westward-leaning candidate to the presidency. But the Orange Revolution’s victory was ephemeral. The new president proved a disappointment. Mr. Yanukovych reappeared to run again in 2010—this time assisted by a slick Washington PR agent named Paul Manafort, who gave Mr. Yanukovych a makeover—haircut, clothes, body language—and coached him on how to scare Ukrainian Russian-speakers with threats that Ukrainian nationalists would persecute them. (Ukraine is a bilingual country, and Ukrainian and Russian are like Spanish and Italian, related but distinct.) The coaching was effective.

Under Mr. Yanukovych, Ukraine was bound to the Kremlin, and the country’s resources flowed largely to the president and his inner circle of oligarchs. A younger generation, born after the fall of the Soviet Union, looked to the prospect of EU membership for the horizon of their future. Then, in November 2013, under pressure from Mr. Putin, Mr. Yanukovych abruptly declined to sign a long-anticipated association agreement with the EU.

Thousands went out to the Maidan once again. They were largely students, young people who felt as if their future had been torn from their hands. They weren’t interested in ethnic differences or language politics. They were interested in Europe’s being open to them. Their slogan was “Ukraine is Europe.”

Mr. Yanukovych sent riot police to beat them. It appeared that he was counting on the terrified parents to pull their children off the streets. But he miscalculated: Instead the parents joined their children there. At one point more than a half million people were on the streets of Kyiv, now with the slogan: “We will not let you beat our children.” All winter they stayed on the Maidan (emphasis added).

Professor Shore's article says that this spirit is still alive, and that the citizens of Ukraine will simply not surrender to the current Russian aggression. A friend of mine, who works for a technology company that employs a number of Ukrainians, has told me the the same thing.
In her article in The Wall Street Journal, Dr. Shore says this:

At present, every third Ukrainian is prepared to resist a Russian invasion with armed force. An additional 21% are prepared to organize civil resistance. In any case, Russia has been engaging in a war with Ukraine for the past eight years. My journalist friends ... are readers of Chekhov and know that it is axiomatic that once a gun appears on the stage, the director must see that it is fired before the end of the last act. Mr. Putin has arranged very many guns on the stage. What choice is there but to be “ready to work, whatever comes”?

I am hoping that Professor Shore and my friend are correct! But here is one other thing about Dr. Shore's article....
In what I am sure many readers might think of as a "detour" into philosophy, not really that relevant to what is happening, right now, in Ukraine, Dr. Shore injects a meditation on "the present":

Philosophers have long struggled with how to think about the present, which cannot be grasped because it has no duration. For Jean-Paul Sartre, the present was the border between facticity—what simply is, what has happened and cannot be changed—and transcendence, an opening to go beyond what and who one has been until this moment. Revolution illuminates this border. It is as if, in Blanche’s words from “A Streetcar Named Desire,” “You suddenly turned a blinding light on something that had always been half in shadow.”

Those who have been reading my blog with some consistency might remember a blog posting from June 2020, "Something Pretty Profound." Hannah Arendt's book, Between Past And Future, talks, as does Dr Shore, about "the present." It is "now," in the present, that we discover that while we would like to "observe," and to "comment," and to place ourselves in the role of "spectator upon history," that we find that this will not, in fact, do.
It is now, right now, in the present, that every consequential decision must be made. The present is the place that requires us to act.
In Ukraine, right now, brave men and women are taking action against authoritarian force. Let us celebrate their action - and their message, because their action speaks, and what they are saying must be a message that we hear, ourselves. We must understand that their action sends a message that applies to all persons, in all places, as well as to those fighting against aggression in Ukraine:
We Will Not Let You Beat Our Children
This is to say that we, we who are alive now, in the present, and who are, willing or unwilling, trustees for the future, will not now bow down to force, and let our future be determined by power. Instead, as William Faulkner told us in his Nobel Prize acceptance speech, we shall not only "endure." We shall - we must - "prevail."
To Subscribe Just Click This Link
Image Credit:
https://www.wsj.com/articles/why-ukrainians-are-prepared-to-fight-11645801045