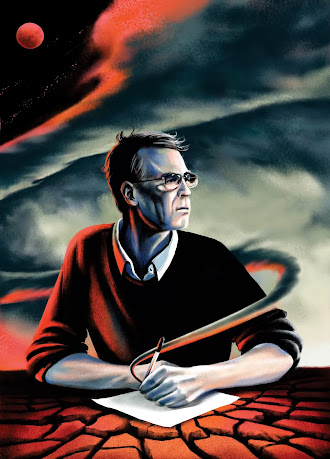 I am not sure whether Kim Stanley Robinson ever uses his initials as a self-designation (I'm told he generally goes by "Stan"). Whether he ever uses his initials, or not, I have appropriated those initials for the headline for this blog posting, and I have appropriated the image above, depicting Kim Stanley Robinson, from a New Yorker article that I think is very much worth reading. In the hard-copy version, The New Yorker article is titled, "Best-Case Scenario." Online, you'll find it titled, "Can Science Fiction Wake Us Up to Our Climate Reality?"
Robinson is a heralded science fiction author who has written over twenty books, with some of them winning major literary prizes. His most recent book is called, The Ministry For The Future. My wife and other instructors at UCSC have been teaching the book, which discusses our climate crisis by way of a rather realistic story, which doesn't come across as a typical "science fiction" effort. The novel definitely includes some science - but that's not the main point. The story, of course, is definitely fiction, but there seems to be a lot more reality than fiction in the book, the way I see it. Robinson, who attended UCSC as an undergraduate, appeared on a recent Zoom call with Crown College students, to discuss both his book and the climate crisis, and I was able to attend by virtue of my special connection with the person who organized the Zoom session (my wife)!
Was I impressed? I was! I decidled that I definitely needed to read that book.
Before being able to do that, I read an excellent review of The Ministry For The Future, provided by way of a conversation between Robinson and Joshua Rothman, and published in the January 31, 2022, edition of The New Yorker. The magazine calls the Rothman article a "Profile," and it does, certainly, profile Robinson, as well as review The Ministry For The Future. The article is particularly engaging in that the majority of the article consists of an account of a hiking trip to the Sierra, in which Robinson and Rothman are accompanied by one of Robinson's friends, Mario Biagioli, a historian of science and a law professor at UCLA.
In his New Yorker article, Rothman provides this short summary of The Ministry For The Future:

The Ministry for the Future, published in October, 2020, ... centers on the work of a fictional U.N. agency charged with solving climate change. The book combines science, politics, and economics to present a credible best-case scenario for the next few decades. It’s simultaneously heartening and harrowing. By the end of the story, it’s 2053, and carbon levels in the atmosphere have begun to decline. Yet hundreds of millions of people have died or been displaced. Coastlines have been drowned and landscapes have burned. Economies have been disrupted, refugees have flooded the temperate latitudes, and ecoterrorists from stricken countries have launched campaigns of climate revenge. The controversial practice of geoengineering—including the spraying of chemicals into the atmosphere to reflect sunlight—has bought us time to decarbonize our way of life, and “carbon quantitative easing,” undertaken on a vast scale, has paid for the redesign of our infrastructure. But it’s all haphazard. We just barely escape the worst climate catastrophes, through grudging adjustments that we are forced to make. The rushed, necessary work of responding to the climate crisis defines and, for some, elevates, the twenty-first century.

In Robinson's account, as you can see, hundreds of millions of people have died by 2053 - and his fiction is meant to reflect the genuine realities of our climate crisis. The crisis isn't fictional at all. Robinson takes very seriously what he sees coming, and yet he proclaims himself to be "utopian, or at least anti-anti utopian." As Rothman reports, Robinson "is especially impatient with those who urge giving up.... What he seeks to practice is, in a phrase popularized by the Marxist philosopher Antonio Gramsci, 'pessimism of the intellect, optimism of the will.'"
That is pretty much my own prescription as I contemplate our present situation. I, too, am "especially impatient with those who urge giving up." Here is the sentence from Rothman's article that most attracted my attention, as I read his engaging description of a hike in the Sierra, combined with an analysis of our climate crisis:
Climate work will the be main business of this century.
That statement strikes me as absolutely correct. In other words, we need to effect a global reorganization of what we do, what our jobs are, and how we spend our time. What we take for granted as "realities" must be left behind. Our job will be to create new realities, new human realities, in the world for which we are responsible, while protecting and preserving the realities of the World of Nature, upon which all life ultimately depends.
Climate work will be the main business of this century. I think that's true, and this century is already well underway.
It's time to get to work!
To Subscribe Just Click This Link
Image Credit:
https://www.newyorker.com/magazine/2022/01/31/can-science-fiction-wake-us-up-to-our-climate-reality-kim-stanley-robinson