#57 / Is There A Religion Of Liberal Censorship? 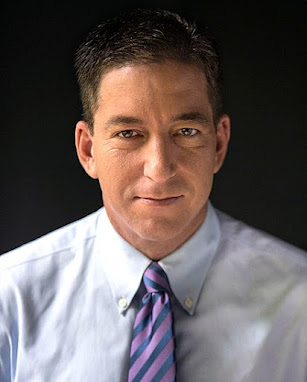 I have, historically, always had a pretty good feeling about Glenn Greenwald, who is pictured above. In 2013, Greenwald played a key role in helping Edward Snowden to release classified information to the public, which information showed that the United States government was spying, relentlessly, on all of its citizens, in the name of fighting "terrorism."
Debate has ensued about whether Snowden is a "traitor" or a "hero." I tend to gravitate to the "hero" side of the argument, so Greenwald's role in helping to reveal to the citizens of the United States what its government was doing, and what the government was trying to conceal that it was doing, have left me with a sense of gratitude to Greenwald. The people can't be in charge of the government if the people don't know what the government is doing. Thanks to Snowden and Greenwald, we now know some things that we didn't know before, and I think that's a good thing.
I have also much appreciated Greenwald's general support of the right to "privacy." I teach a course titled, "Privacy, Technology, And Freedom," and I regularly show my students an engaging YouTube video featuring Greenwald on privacy, which you can see yourself, using the following link:
All that said, I have been considerably less enamored with Greenwald's most recent writings, which have focused on what he believes is the abject dishonesty and bias of the so-called "mainstream" and "liberal" media, the intellectual dishonesty of "progressives" in general, and the near criminality of the Democratic Party in all of its various manifestations.
Not that some criticism isn't in order! I think it is - and this recent article, for instance, makes some excellent points. It is the tone and stridency of Greenwald's commentaries that have been a bit offputting to me. Greenwald now authors a Substack blog, and if you peruse his recent articles you will see what I am talking about.
A Greenwald article that appeared on January 29, 2022, and that was titled, "The Pressure Campaign on Spotify to Remove Joe Rogan Reveals the Religion of Liberals: Censorship." I don't think there is a paywall, and I invite readers of this blog to click that link and to see what they think, before I tell you what I think.
To provide an excerpt, here is a sample of what Greenwald has to say about a putative liberal religion of censorship (emphasis in original):

American liberals are obsessed with finding ways to silence and censor their adversaries. Every week, if not every day, they have new targets they want de-platformed, banned, silenced, and otherwise prevented from speaking or being heard (by "liberals,” I mean the term of self-description used by the dominant wing of the Democratic Party).

For years, their preferred censorship tactic was to expand and distort the concept of "hate speech” to mean "views that make us uncomfortable,” and then demand that such “hateful” views be prohibited on that basis. For that reason, it is now common to hear Democrats assert, falsely, that the First Amendment's guarantee of free speech does not protect “hate speech." Their political culture has long inculcated them to believe that they can comfortably silence whatever views they arbitrarily place into this category without being guilty of censorship.

Constitutional illiteracy to the side, the “hate speech” framework for justifying censorship is now insufficient because liberals are eager to silence a much broader range of voices than those they can credibly accuse of being hateful. That is why the newest, and now most popular, censorship framework is to claim that their targets are guilty of spreading “misinformation” or “disinformation.” These terms, by design, have no clear or concise meaning. Like the term “terrorism,” it is their elasticity that makes them so useful.

As I have already indicated, it is the "tone" of Greenwald's recent attacks on liberals, the Democratic Party, and the mainstream media that have been offputting to me. Consider the extract above as a good example of what I have found to be offputting. "Off-putting" or not, though, I think that Greenwald's criticisms should be addressed on their merits, which means that their intentionally offensive tone must be disregarded.
In essence, at least so it seems to me, Greenwald is criticizing the "liberals" for doing the very same things that the liberals think that the "conservatives" do. Each "side" in our increasingly polarized body politic accuses the other side of trying to suppress the valid criticisms and comments of those with whom it disagrees. Democracy itself seems to be at stake - at least that is the view of many - which means the stakes are very high indeed.
What about the merits?
I do think that Greenwald is correct that some of those whom he calls "liberals" are trying to "shut down" those with whom they disagree. That was the point I made in my earlier blog posting, linked above (and here again). I have also recently written about how the left-oriented political group, Our Revolution, has sponsored the idea that right-wing political figures shouldn't be allowed to run for office.
I don't think, though, that efforts to "shut down" and silence those with whom you disagree is a tactic utilized only by the "liberals" and by the "Democrats." Everyone is doing it! Political partisans on all sides (and members of the public at large) are now often suggesting that those who have different opinions are propagating "misinformation," of "fake news," and that this is intolerable. Since untrue statements, if believed, may cause real problems for real people, lots of people have concluded (on all sides) that trying to suppress the speech of those with whom they disagree is of positive benefit to the body politic.
As we all know, the First Amendment to the United States Constitution prohibits the government from making any law that denies "free speech." The government can't put someone in jail, or fine them, for saying that the Covid-19 virus doesn't really exist, so that no one should wear a mask or get vaccinated. The government can't take action to "shut down" speech with which it disagrees, even if the speech poses some rather certain public health dangers. We all know that, but the First Amendment only limits governmental action. What about private actions to eliminate what private individuals believe is disinformation? What if beloved songwriters demand their music be removed from Spotify, since they don't like some of the opinions that can be heard on Spotify, which opinions they believe are the kind of "misinformation" that must be suppressed, in the public interest?
Well, the American tradition is to let the arguments rip. The government stays out of it, and public debate about what is true and right, and what is not, is left to that proverbial "marketplace of ideas." "Liberals" believe one thing; "conservatives" believe something else, and everyone gets to say what they think, and to assert their opinion in every forum and in any way they want to. People make up their own minds, and public policy decisions will reflect the majority.
That's how we have always done it, so what's Greenwald's beef?
Greenwald's beef, the way I see it, is that the places, nowadays, in which we can have the arguments, are not in the public streets and squares - and the arguments don't take place in penny press papers handed out on the street corners. Nowadays, the places in which political arguments can be advanced are privately-owned "platforms," the property of massive corporations, so that if such platforms end up taking sides in an argument, the other side is no longer heard on that platform. If the so-called "mainstream" media takes one side over another (say the "liberal" over the "conservative" side), the conservative side will simply not be heard at all in the mainstream media. What used to be the "public square" is now privately owned, and privately managed, and that changes the nature of what might otherwise be a fair debate.
Greenwald seems to be something less than perfectly evenhanded in his criticisms, since massive media platforms with a "conservative" slant also use their economic power to disable and shut out the opinions with which "conservatives" disagree, just as much as the so-called "mainstream media," "liberals," and "Democrats" seek to "cancel" the views which they find objectionable. Platform polarization is already much in evidence, and is getting more so, and it is a real problem.
But is there a specifically "liberal" commitment to "censorship," a liberal commitment to censorship so deeply held that it verges on a religious belief? I don't think so, but I do think we have a problem characterized by "liberals" being unwilling to listen to "conservatives," and to debate them on a level playing field, and we have exactly the same problem coming from the other side.
Both sides will deny it, and blame the other, but we do have a problem, and our democracy depends on debate.
To Subscribe Just Click This Link
Image Credit:
https://en.wikipedia.org/wiki/Glenn_Greenwald