Our Revolution, Wikipedia tells us, is an American progressive political action organization spun out of Senator Bernie Sanders's 2016 presidential campaign. The organization's mission is to educate voters about issues, get people involved in the political process, and work to organize and elect progressive candidates. Our Revolution is also the title of a book by Sanders released in November 2016.
While I have not been that active with Our Revolution, I have contributed, and I am very supportive of the aims and ambitions of the organization. I was a delegate for Bernie Sanders at the 2016 Democratic National Convention, and I supported Bernie Sanders for president in 2020, too.
That statement of support having been made, color me disappointed in an email I received from Our Revolution on Sunday, February 20, 2022. Here is the pitch: 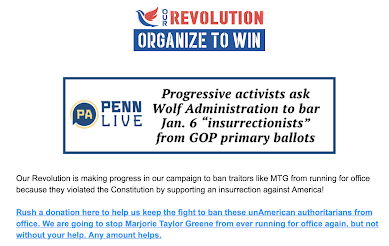 I think that the positions taken by Marjorie Taylor Greene and others who suggest that former president Trump actually won the 2020 election, and that the January 6, 2021, insurrection was justified and appropriate, are obnoxious in the extreme, and that she and other such politicians are totally wrong in what they have been saying and doing in the aftermath of what was, really, an attempted coup.
However, calling these people (not yet convicted of any crime) "traitors," and "insurrectionists," and "unAmerican authoritarians," and urging that they be prohibited from ever running for office, strikes me as profoundly undemocratic, and as exactly the kind of thing that such politicians are saying about those in the Democratic Party with whom they disagree.
Mobilizing political power to ban people from running for office is not the way democracy is supposed to work. I was disappointed that Our Revolution sent out the fundraising pitch I have presented, above.
To Subscribe Just Click This Link
Image Credits:
(1) - https://ourrevolution.com/
(2) - Our Revolution email