#56 / That Person Is A Mentally Ill Person 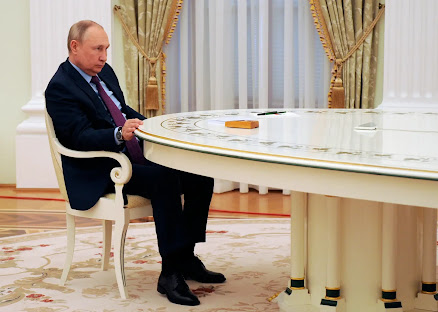 I have been reading the news, and I wish I could agree with Anna Maklakova, a twenty-two year old resident of Kyiv, Ukraine. Maklakova is quoted in an article that ran in the February 24, 2022, edition of The New York Times.
The hard-copy version of the article in which Maklakova is quoted is titled, "Anxiety, Not Panic, Is in the Air on a Westbound Train." Reporter Marc Santora accompanied travelers on Ukrainian Train #749, which had left Kyiv and was heading to Lviv, located near the Polish border, far from the capital. When Santora spoke with Anna, she was not buying into the idea that a war that would threaten Kyiv was imminent:

Anna Maklakova, 22, did not dismiss the idea that a war was possible. For much of her life, since she was 14, there has been a smoldering conflict against Russian-backed separatists in the Donbas region of eastern Ukraine.

Harder to fathom for her were the dire predictions from many in the West that a new war could be unlike anything the world had seen since 1945, that a bombardment of Kyiv could kill tens of thousands of people and lay waste to what is in every respect a modern western city of 2.8 million people.

Another passenger on the train was Khrystyna Batiuk, forty-seven years old. Santora reports, as follows, on why Batiuk was leaving Kyiv:

Khrystyna Batiuk, 47, was visiting her daughter, Marta Bursuk, in Kyiv when she heard Mr. Putin speak and in an instant, she said, it was clear to her that her daughter’s 1-year-old baby boy, Oleksandr, needed to leave town.

“That person,” she said, referring to Mr. Putin, “is a mentally ill person for whom it is unclear what to expect.”

I am afraid that Batiuk has a clearer picture of what's happening than the "I mean, come on...." view articulated by Maklakova. According to another article from The New York Times, also found in the February 24, 2022, edition of the newspaper, this is what Vladimir Putin had to say, in the speech that caused the "flee now" reaction from Batiuk:

“Anyone who tries to interfere with us, or even more so, to create threats for our country and our people, must know that Russia’s response will be immediate and will lead you to such consequences as you have never before experienced in your history,” Mr. Putin said. “We are ready for any turn of events.”

Maybe I am overdramatising it, but that sounds like a threat of nuclear war, to me.
And I really do wish I could agree with Anna Maklakova!
"I mean, come on, this is the 21st century. How could there be such a thing?"
To Subscribe Just Click This Link
Image Credit:
https://www.nytimes.com/2022/02/23/world/europe/putin-announces-a-military-operation-in-ukraine-as-the-un-security-council-pleads-with-him-to-pull-back.html