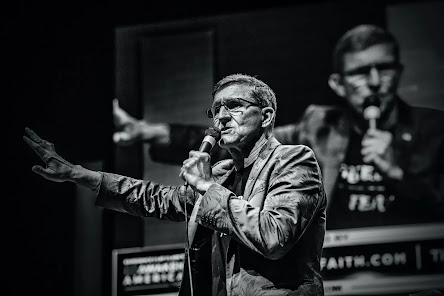 The photo above shows Michael Flynn, a former Lieutenant General in the United States Army. Flynn, some apparently say, is "the great martyr of the Trump presidency." That idea is explored in "The Mystery of Michael Flynn," which is an investigative report by Robert Draper, published in The New York Times Magazine last Sunday. If The Times' paywall permits, I encourage you to read Draper's article.
I, personally, have paid little attention to Flynn and his confederates - those who have so aggressively pursued the claim that Donald Trump actually "won" the 2020 presidential election, and that a vast, "deep state" conspiracy is the only thing that has allowed Joe Biden to assume his present office. Many, I assume, will be familiar with these names on the list of Flynn's confederates: Sidney Powell, Rudy Giuliani, Mike Lindell, and L. Lin Wood. I have heard of them all, but (as with Flynn) have paid them little attention. In Draper's article, many others are listed, too. The effort to overturn the 2020 election has not been, exactly, an ad hoc effort, and it is continuing.
What struck me most deeply in "The Mystery of Michael Flynn" was how important it has been to claim that there is a "deep state" that is dedicated to overturning American democracy and enslaving Americans. The conspiracy theories that seem to abound on the far right, or "alt-right," extend beyond claims that the 2020 election was fraudulent, and include our current anti-vaccination hysteria, and the "trucker convoys" that have caused some significant problems with the movement of goods between Canada and the United States.
Here is a short excerpt from the Draper report:

In November in New Hampshire, I attended an “election-security seminar,” presented by an organization called the New Hampshire Voter Integrity Group. The conference room was standing room only. The speakers included a state representative, a Republican candidate for Congress and Seth Keshel, who argued that their foremost mission should be “the remediation of the 2020 election.”

The final speaker was Ivan Raiklin. In his hypercaffeinated cadence, Raiklin devoted his talk to enumerating the supposed conspirators whose ongoing presence helped explain “why we haven’t remedied 2020 yet.” Those forces, he said, included the F.B.I., the Bushes, Chief Justice John G. Roberts Jr., former Vice President Mike Pence and former Vice President Dick Cheney. This was the deep state that Trump was up against, Raiklin said.

And, he added, “who’s the first person of any stature whatsoever who has any credibility, other than within his family and the Trump Organization, that comes in and bats for him? This is important. This is the most important thing. Say it louder: General Flynn.” Flynn and Trump’s independence was a threat to the deep state, Raiklin insisted, which led to Flynn’s indictment and Trump’s defeat. “The reason why a million people showed up on Jan. 6,” he said, was that “they know bits and pieces of the story. And they knew that something had to be called out publicly (emphasis added). ”

I do not believe that a "deep state" has, in fact, stolen the 2020 election away from Donald Trump. I don't believe that Mike Pence, the F.B.I., and the Chief Justice of the Supreme Court are in covert contact and are conspiring together against truth, justice, and the American Way.
I do believe, though, that the national government is no longer open and accessible to ordinary citizens. I don't believe that Americans know what is really going on with respect to a lot of things that profoundly affect them - for instance, what the American military is doing around the world, and how major corporations are affecting every aspect of our economy and society.
There really is a "deep state," in the sense that our government is no longer under the control of the American people, because we don't, actually, know what our government is doing in our name.
The fact that this is true allows people like Michael Flynn, and Rudy Giuliani, and all the rest of the Trump menagerie, to make a convincing case that bad people are steering the state in bad directions, and that every expedient is necessary (civil war, if it comes to that) to restore democracy.
Making light of claims that the "deep state" is in charge supports the kind of political polarization and social disintegration that is a real danger to the republic. This is, I think, a place where a "concede to win" strategy makes lots of sense.
We need a collaborative effort to eliminate the "deep state," and this effort must be made across the polarization that is now destabilizing the body politic. Those on the left, right, and the center should begin demanding effective action to open up the secrecy and non-accountability that lets those like Michael Flynn appear to be heroes defending democracy.
Just a thought!
Image Credit:
https://www.nytimes.com/2022/02/04/magazine/michael-flynn-2020-election.html
To Subscribe Just Click This Link