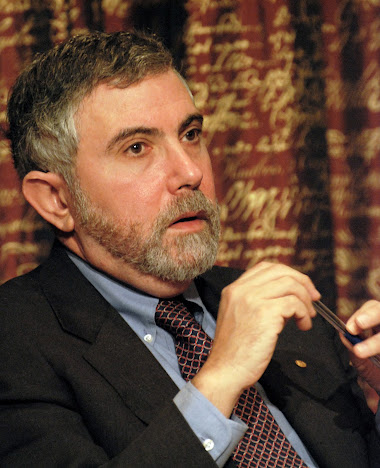 Paul Krugman, who writes for The New York Times, is an economist, and also, as Wikipedia informs us, a "public intellectual." Krugman is pictured above, circa 2008.
On Sunday, December 19, 2021, in a column that ran to a full page in The Times, Krugman discussed "The Year of Inflation Infamy." He is speaking, of course, of last year, 2021.
People are understandably worried about inflation - and particularly that the "year of infamy" experienced last year might continue extending itself into the current year, and even beyond. In his discussion of this possibility, Krugman provides a rather helpful "history of inflation in the United States." As for our current situation, while Krugman is not an alarmist, he does note that we are experiencing "the highest inflation in almost 40 years." If that were to continue, Krugman would definitely be worried. He suggests, though, to appropriate that wonderful advice from World War II Great Britain, that we "keep calm and carry on." Krugman believes that the inflation we are currently experiencing is only temporary.
In making this assessment, Krugman states that he is, among economists, on "Team Transitory," but confesses that some very good economists are on "Team Persistent," and that the economists on that team might be right. While "Team Transitory" sees our current inflation as a "temporary blip," there is a real possibility that something else is going on. Krugman proclaims himself ready to change teams, if certain things occur. The following description of what could make Krugman change his mind about inflation is what prompts this blog posting:

I’m a card-carrying member of Team Transitory. But I would reconsider my allegiance if I saw evidence that expectations of future inflation are starting to drive prices — that is, if there were widespread stories of producers raising prices, even though costs and demand for their products aren’t exceptionally high, because they expect rising costs or rising prices on the part of competitors over the next year or two. That’s what kept inflation high even through recessions in the 1970s. So far I don’t see signs that this is happening — although the truth is that we don’t have good ways to track the relevant expectations. I’ve been looking at stories in the business press and surveys like the Fed’s Beige Book, which asks many businesses about economic conditions; I haven’t (yet?) seen reports of expectations-driven inflation (emphasis added).

Krugman isn't really worried about "traditional" inflation, in which the scarcity of goods and services leads to price increases - "too much money chasing too few goods." As he notes (and haven't we all experienced this ourselves, as we make our own buying decisions), "the cure for high prices is high prices." The economy, at least theoretically, is supposed to be pretty much self-correcting.
Krugman is not too concerned about what happens when "real" factors are driving prices higher, but what happens when buyers are willing to pay more now because they expect that prices will be higher later. And, of course, once that pattern takes hold, prices "later" are higher than previous prices, and so the idea that you need always to pay more is self-validating, and self-perpetuating.
I wanted to feature Krugman's discussion not only because the economic issue he is talking about is important in itself, but because the idea that people are driven by their "expectations," even more than by the realities they experience, is an incredibly important insight into human behavior.
As I said in my blog posting on January 8, 2022, It is my belief that people basically do what is expected of them. I believe that this is true not only when people are making purchasing decisions, but always. If people think they are expected to follow the law, they usually will. If they think that no one really expects them to follow the law, they will break the law.
If you expect your children to violate all the family rules, they probably will. Etc.!
When we think about our common life together, as we face massive crises practically across the board, we need to pay attention to this important insight into human behavior. If we are to pull through as a democratic society, and if the human race is going to alter its relationship to the natural environment so that we don't overheat our planet to the point that human civilization will perish (along with millions of living species), then we need to expect better of ourselves.
By and large, we all act as we are expected to act. So......
We Need To Raise Our Expectations!
Image Credit:
https://en.wikipedia.org/wiki/Paul_Krugman
To Subscribe Just Click This Link