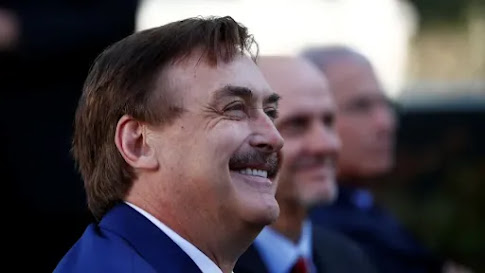 Pictured is Mike Lindell, the so-called "My Pillow Guy." That name has been bestowed on Mr. Lindell because he is the Chief Executive Officer of "My Pillow," a business that sells... (you guessed it) pillows and other sleep-related items.
Lindell is also a major supporter of former president Donald J. Trump, and he is a strong proponent of the claim that Mr. Trump won the 2020 presidential election. Click on the link and you will see why Lindell is said to peddle "conspiracy theories," besides all those pillows, of course.
Lindell is not just talking to the media about his theories, either. He has also developed a petition to the United States Supreme Court, asking the Court to take up the matter of the validity of the 2020 election. Most recently, as reported on December 8, 2021, Lindell is urging those who share his views about the 2020 election to "bombard the Supreme Court" with copies of his petition.
I have written about former Supreme Court Justice Hugo Black's concern that the Court made a mistake in Griswold v. Connecticut (the case that declared that our Constitution guarantees a "right to privacy," despite the fact that the word "privacy" does not, in fact, appear in the Constitution). Black said he thought that the Court's opinion could mislead the public into thinking that the Supreme Court is just another "legislative" body, which it isn't. Justice Black argued that it was important to make sure that the public didn't make this mistake, so that public concerns about legal matters would focus on the legislative branch of government, not on the judicial branch.
Lindell, in my opinion, is truly deluded about the "conspiracy" he says cheated our former president out of reelection in  2020. He is also seriously unclear on the concept of how laws are made in the United States of America. Nine unelected Justices don't make the law. WE make the law, acting through our elected representatives.
I am all in favor of "bombarding" officials with demands that they take action. That is what citizens ought to do. However, that's what you do to legislative bodies, at the local, state, and federal level. The courts operate on a different principle, as I have been fond of pointing out, pointing to a tennis court as the model on which the courts actually operate.
Looks to me like Justice Black's concerns were not unfounded!
Image Credit:
https://www.thedailybeast.com/mike-lindell-supports-fans-push-to-bombard-supreme-court-with-mailed-copies-of-his-complaint
To Subscribe Just Click This Link