#316 / An Observation By Justice Black 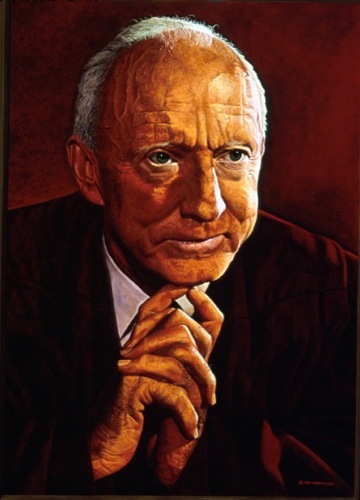 Pictured above is Justice Hugo Black. Black was appointed to the United States Supreme Court by President Franklin D. Roosevelt. Black served on the Court from 1937 to 1971.
In 1965, the Supreme Court decided the seminal case of Griswold v. Connecticut. The Court's decision in that case established a constitutional "right of privacy." I teach a course at the University of California, Santa Cruz, titled, "Privacy, Technology, And Freedom," and I always have students read this very important decision. Many subsequent Supreme Court decisions have been based on Griswold, and on the constitutional "right of privacy" that Griswold announced. One of these decisions is Roe v. Wade.
If anyone reading this blog posting has not read Griswold v. Connecticut, I certainly encourage you to click the link, above, and to read what the Justices had to say about privacy. They had a lot to say!
In their decision in Griswold, the Supreme Court decided that a Connecticut law that made it a crime for any married person to use contraception was unconstitutional, and hence invalid. Estelle Griswold, the head of Planned Parenthood in Connecticut, had been tried and convicted of violating that law - not because she herself had used contraception, but because she was acting as an accessory when she helped married persons obtain and use various contraceptive devices. The Court held that a constitutional "right of privacy" shielded Griswold from prosecution under the Connecticut law.
Today, it seems pretty hard to believe that a state would ever make it a crime for a person to use contraceptives, but that was the law in Connecticut in 1965. Justice Stewart called it a "silly law." The decision in Griswold was 7-2. Justice Black was one of the dissenters. The other dissenter was Justice Stewart - the one who called the Connecticut law "silly."
The word "privacy" is not found in the Bill of Rights, or in any other place in the Constitution, but  the Court nonetheless did find, in Griswold, that such a right exists. Justice Douglas, writing for the majority, held that this unlisted "right of privacy" was derived from "emanations" and "penumbras" originating in various provisions in the Bill of Rights.
Justice Black had a problem with this - and with other claims made by other Justices who voted to establish a formerly unknown "right of privacy." Here is what he said in his dissent:

I do not to any extent whatever base my view that this Connecticut law is constitutional on a belief that the law is wise, or that its policy is a good one. In order that there may be no room at all to doubt why I vote as I do, I feel constrained to add that the law is every bit as offensive to me as it is to my Brethren of the majority...

This Court does have power, which it should exercise, to hold laws unconstitutional where they are forbidden by the Federal Constitution. My point is that there is no provision of the Constitution which either expressly or impliedly vests power in this Court to sit as a supervisory agency over acts of duly constituted legislative bodies and set aside their laws because of the Court's belief that the legislative policies adopted are unreasonable, unwise, arbitrary, capricious or irrational. The adoption of such a loose flexible. uncontrolled standard for holding laws unconstitutional, if ever it is finally achieved, will amount to a great unconstitutional shift of power to the courts which I believe and am constrained to say will be bad for the courts, and worse for the country. Subjecting federal and state laws to such an unrestrained and unrestrainable judicial control as to the wisdom of legislative enactments would, I fear, jeopardize the separation of governmental powers that the Framers set up, and, at the same time, threaten to take away much of the power of States to govern themselves which the Constitution plainly intended them to have (emphasis added).

As I think about Roe v. Wade, in today's context, Black's point seems prescient.
Our system of democratic self-government is intended to make the "legislative" power preeminent. What Black was warning about was a situation in which everyone would decide that it was the Court that ultimately was the most important part of our government, so that our "political" efforts would be focused on the Court, not on the legislative branch, and what it decides. As our Congress stalls, and particularly in the Senate, as I discussed yesterday, it does seem, more and more, that everything depends on our very political Supreme Court. As Black said, that is "bad for the courts, and worse for the country."
We need to make the legislative branch preeminent again, because that is the branch that is, ultimately, susceptible to control by the people - hard as it is to exercise that control!
__________________________________________________
Image Credit:
https://www.oyez.org/justices/hugo_l_black
To Subscribe Just Click This Link