#35 / Searching For Some "Superordinate" Goals 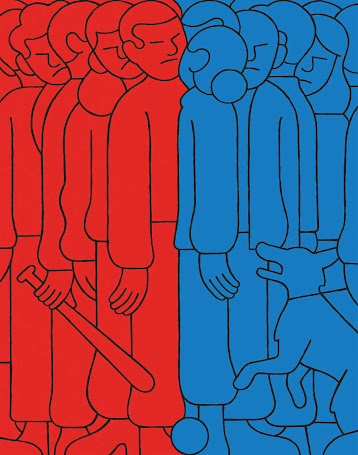 Elizabeth Kolbert, surely one of the nation's most acute observers of what is really happening in both the human and natural worlds, has penned a book review for the January 3 & 10, 2022, edition of The New Yorker. Kolbert's review is titled, "Poles Apart," and the subhead provided is a question: "Can American politics survive an era of hyperpartisanship?"
I am citing to the hard-copy version of the magazine. When you click the link I have provided, the article you find will bear a different title and subhead. Several books are mentioned in Kolbert's assessment, most of them detailing and helping to explain what most of us already understand: The United States of America, in early 2022, is hugely "polarized," and things seem to be getting worse, not better, on the polarization front.
Is there anything that can be done? Probably not a lot, Kolbert advises, but she does offer one possible way that we might be able to shake off the polarization that not only inflames, but immobilizes us. In her review, Kolbert discusses the so-called "Robbers Cave Experiment," a 1950s sociological/psychological experiment that demonstrated how easy it is to turn groups of people against each other - for no valid reason whatsoever. If you are not familiar with this experiment, it is worth reading about it, in Kolbert's article, and otherwise. It is a pretty fascinating story.
At any rate, here is what Kolbert says may be a way out of our current situation, and how we might escape from a political polarization so intense that many now question whether there is any future hope for democracy in the United States:

The Robbers Cave experiment suggests another way out. After having nudged the Eagles and the Rattlers toward conflict, the researchers wanted to see if they could be nudged back. They brought the boys together for a variety of peaceable activities. One day, for example, they arranged for the two groups to meet up in the mess hall for lunch. The result was a food fight. Since “contact situations” weren’t working, the researchers moved on to what they called “superordinate goals.” They staged a series of crises—a water shortage, a supply-truck breakdown—that could be resolved only if the boys cooperated. Dealing with these manufactured emergencies made the groups a lot friendlier toward each another, to the point where, on the trip back to Oklahoma City, the Rattlers used five dollars they’d won from the bean-collecting contest to treat the Eagles to malteds.

Could “superordinate goals” help depolarize America? There would seem to be no shortage of crises for the two parties to work together on. The hitch, of course, is that they’d first need to agree on what these are.

The good news with respect to polarization - and Kolbert knows a lot about this subject - is that we are all facing not a "manufactured emergency," but a real emergency, namely, what is often called the "Climate Crisis," the result of human-caused global warming. Kolbert doesn't call global warming out specifically, so let me do so. Dealing with our global warming crisis is certainly a worthy "superordinate" goal.
Do you think we might all be able to get together to deal with the global emergency that is putting everyone's life in peril? I think we could!
I am betting on it!
And as Leonardo DiCaprio might advise: "Just Look Up!"
To Subscribe Just Click This Link
Image Credit:
https://www.newyorker.com/magazine/2022/01/03/how-politics-got-so-polarized