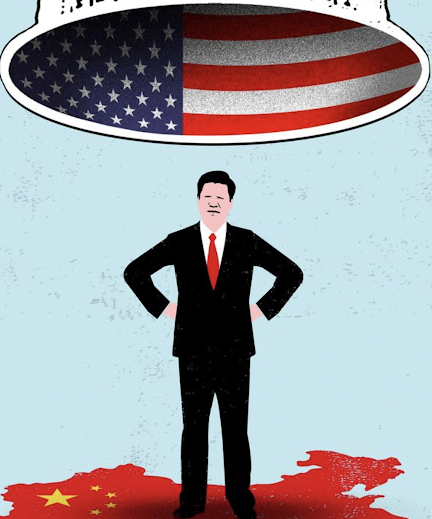 Hal Brands is the Henry Kissinger Distinguished Professor of Global Affairs at the Johns Hopkins School of Advanced International Studies. He is also a senior fellow at the American Enterprise Institute. Brands, in other words, is an academic spokesperson for corporate America. Writing in the Saturday/Sunday, December 4-5, 2021, edition of The Wall Street Journal, Brands advises us that our "Cold War" experience with the Soviet Union is a great model for how to deal with our "Great Power" rivalry with China.
According to Brands, the key lesson we should have learned from our Cold War experience with the Soviet Union is that "Containment" works. As Brands puts it, "Containment yielded an epochal U.S. victory because it was well-suited to long-term rivalry - the very quality that makes it relevant today."
Brands' article, which you might or might not be able to read in its entirety by clicking the following link, is titled, "Containment Can Work Against China, Too."
"Containment" is only one of several "C" words that came to mind as I read Brands' analysis. Here are three of the "C" words I thought of, listed below, in the order in which they came to mind as I considered Brands' pitch:
The idea that "Containment" is a better alternative than an effort at "Conquest" (another "C" word), which is what I think Brands is urging, is premised on the idea that "Conflict" (or, perhaps, "Competition") is our inevitable starting point. But is it?
There has been a lot of recent speculation that we are heading into a nuclear war with China, as China is, quite clearly, "arming up," and if the choice is between "Containment" and an effort at "Conquest," I will have to say that I am on Brands' side. "Containment" is certainly a better alternative. Brands tells us that "Containment" is better because Brands thinks that "Containment" is a "winning" strategy. I say that "Containment" is better than "Conquest," as a diplomatic and military objective, because I know that making "Conquest" the objective is certainly a "losing" strategy!
Let us, though, just consider for a moment the idea that "Conflict" might not, in fact, be our inevitable starting point with respect to our relationship to China, or with respect to our relationship any other nation in the world, either. What about "Cooperation?"
If the United States could start basing its diplomatic and military decisions on the idea that our actual relationship with other nations is really more about "Cooperation" than about either "Conflict" or "Competition," then a new set of options for national action opens up.
I would like to suggest that this is, in fact, "where we are." The nations of the world, like the citizens in each nation, are "in this together."
Every nation on Earth - China, the United States, and all the others - face the same existential crisis. We are losing the Natural World on which all that we do is ultimately dependent. As we continue our generation of greenhouse gases, and as we allow deforestation and water overdraft to continue, we are putting every nation, and every person on Earth, at risk. When all the fishes die, when the snows melt in the Himalayas, when crops fail, worldwide, when outsized storms destroy our human cities, and floods decimate them, as wildfires burn everywhere on Planet Earth, we will (and perhaps too late) learn "where we are."
I suggest that we should figure things out sooner, rather than later. Let's think about some better "C" words. "Conflict," "Conquest," and "Containment" aren't going to save us this time around. How about:
There are probably some other ones, too. Let's just start building an international order on the basis that "cooperation," not "conflict," is where we have to begin. "Cooperation" is the mandate to which we must respond. Let all our strategies begin with that!
Image Credit:
https://www.wsj.com/articles/containment-can-work-against-china-too-11638547169
To Subscribe Just Click This Link