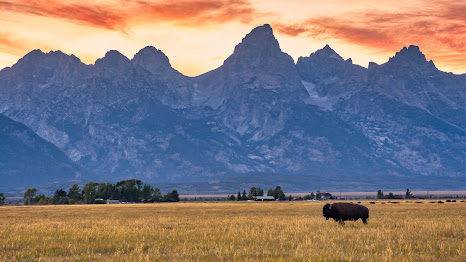 Beth Shapiro, who is a professor of evolutionary biology at the University of California, Santa Cruz, has written a book called Life As We Made It. Her book was reviewed, recently, in The Wall Street Journal. Adrian Woolfson, the reviewer, titled his review, "Our Artificial Reality."
One of the points made by Shapiro's book (as reported by Woolfson in his review) is that what appears to us to be "natural" is not, in fact, all that "natural" at all. The world in which we most immediately reside is, increasingly, a world that is the result of human action. We do not live - in case you thought we did - in some kind of "Natural World." Even that buffalo, roaming the plains in the photograph above, is largely a human creation. Human interventions have created a completely different buffalo from the buffalo that was here when white men from Europe first "discovered" North America.
According to Woolfson, Ms. Shapiro tells us that human-engineered buffaloes are just the beginning, and that  we are on the precipice of a "new nature." What is left of the World of Nature is about to undergo a "metamorphosis" into a world that is much more entirely our own, human creation.
Some may be dubious about the desirability of such a thing, but not, apparently, Shapiro. According to the review, Shapiro is an enthusiastic supporter of "genomic engineering." She is predicting that "biotechnology can help us 'engineer our way out' of impending environmental crises." Let's set hesitations aside, is the message, and get with the program. According to the review, Shapiro is arguing that "even if we conclude that we should not deploy genetic technologies and [should] decide [instead] to preserve the natural world, unexpected crises will compel us to do so."
Maybe that's true. Maybe we will all have to "get with the program," as Shapiro is urging. Nonetheless, I have a continuing love and respect for "Mother Nature," and I tend to think that Woolfson's comments, at the end of his review, are right on target:

While there is some equivalence between, on the one hand, the indirect manipulation of genomes through breeding and environmental degradation and, on the other, the biotechnological modification of genomes, genome engineering carries far greater repercussions; the case for its widespread implementation should be treated as a separate dilemma. Our enthusiasm and optimism for the new age of genomic engineering that is already upon us should be accompanied by an appropriate degree of caution and humility. We know precious little about most organisms and their ecosystems. To meddle with their structures is to play with technologies that may eventually facilitate the rewriting of human nature.