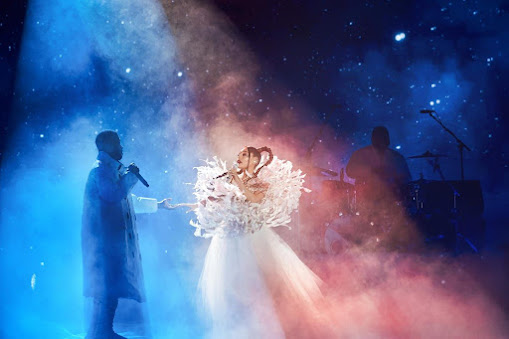 I watched "Don't Look Up" on Netflix on New Year's Eve. This is a pretty long movie (two hours and eighteen minutes), and I began to watch it at a little before 10:00 p.m. I had just finished watching another Netflix film, "The Lost Daughter," a very faithful rendering of the short novel by Elena Ferrante. "The Lost Daughter" is also a pretty long movie, at two hours and two minutes, and the length of these movies was a plus, because I was trying, for once, to stay up past midnight, to welcome in the 2022 New Year. That goal was definitely attained. "Don't Look Up," which seems to present as something between a comic romp and a horror movie, kept me up way past midnight. I couldn't sleep after I watched it.*
"Don't Look Up" depicts the reactions on Earth to the news from scientists that a comet as big as Mount Everest is hurtling directly towards us, with an almost 100% certainty that it will hit the Earth, and with a similar certainty that if it does hit the Earth that will mean an end to all life on the planet. The only hope is to find a way to divert the comet from its path.
There does seem to be a possibility that this can be done, but the President of the United States, a Trump-like figure (a woman, played by Meryl Streep), decides to try to "capture" the comet, to make use of the valuable minerals of which it is composed. This idea is advanced by a high-tech billionaire, who seems to have been modeled upon a combination of Elon Musk, Jeff Bezos, and Mark Zuckerberg. Most of those who have seen the movie believe that it is intended as a cautionary tale, with the "comet" in the movie representing the oncoming disaster portended by real life global warming.
Do I need to tell you that the disaster foretold in the movie was not avoided? It wasn't, and that is what kept me up way past midnight. Fictional though the movie might have been, the "reality" of an existential threat to life on our planet (human-caused, not comet-caused) is no joke, and I unsuccessfully tried to sleep but couldn't. The looming disaster, that is all too real, is what made me sleepless.
In the movie, those who would otherwise have been petrified by the threat posed to the planet find succor in denial. Even when the comet becomes visible in the sky, those of the president's party adopt the slogan "Don't Look Up." While it is painful to have to prescribe this (in the movie, as in real life), the right message is just the opposite:
JUST LOOK UP!*
Once we have done that, and once we have seen, and acknowledged, exactly what we are facing, we are going to have to take actions fundamentally to change our lives. This New Year presents us with the best time to begin.
To Subscribe Just Click This Link
Image Credit:
https://www.distractify.com/p/where-was-dont-look-up-filmed
* Click his link for the lyrics to Ariana Grande's song, "Just Look Up," featured in the movie
*Click here for a review