#33 / Distinctions Without A Difference 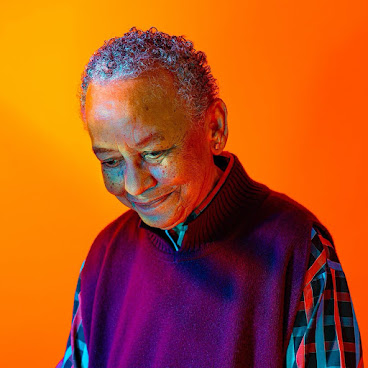 Nikki Giovanni is pictured above. Giovanni is a poet, who was born about six months before I was, according to the Wikipedia article you'll find if you click the link in the first line of this blog posting. Giovanni was born on June 7, 1943, and I was born on December 26th of that same year.
According to that Wikipedia article, Giovanni is "one of the world's most well-known African-American poets." When I found that out, by reading Wikipedia, which is how I did find that out, I felt very much chagrined. I didn't know anything about Giovanni until I read an interview with her in The New York Times Magazine, on January 2, 2022. In the hard-copy version of the magazine, as it was delivered into my front yard on Sunday morning, David Marchese's interview was headed, "Nikki Giovanni believes we need to break free of our rigid categories. 'If Earth survives, gender and race are going to go.'"
The headline that was provided for the online version of the article is a bit more pungent: "Nikki Giovanni Has Made Peace With Her Hate."
I have to confess that I am not very clear about that online headline. In the interview, I don't find a lot of discussion about the "hate" that Giovanni has supposedly overcome. Probably, those who didn't just find out about the existence of Nikki Giovanni, when reading the article, will have a better idea of how that headline applies. Giovanni first came to public attention during the Civil Rights movement, and while I am just speculating, I would not be surprised to learn that a reaction to Giovanni's Civil Rights-related poetry (reflecting, I am speculating, her fully justified anger at racial injustice) would have been characterized as "hate" by those with whom she was so justifiably angry. As another alternative, perhaps the reaction against Giovanni's anger might have been seen as "hate" directed at her. Maybe, she herself used the word "hate" to define her feelings - though I do find that a little hard to believe, based only on what I know from the interview and the Wikipedia article.
At any rate, it was the other headline that got me interested in reading the article about a poet I had never heard of - and the headline about "rigid categories" is actually much more directly related to what Giovanni has to say in her interview with David Marchese.
In the interview, Giovanni said that she thought, when she was a little girl, about how she would respond to a Martian, if one appeared to her, and if the Martian asked her, "Who are you?"

The only answer could be “I am an Earthling.” I realized — and have continued to realize — that it would be illogical if I were to tell the Martian I’m a Black woman. That’s because a Martian doesn’t know what Black is, and they don’t know what a woman is. So we know that race is illogical. It is a construct that is destructive. So I’m watching, for example, the transgender kids now, and I think they’re doing something wonderful, because they’re saying about their gender what I had already recognized — and I’m not the only one; don’t misunderstand — about race. They’re saying they will not be blocked by what somebody else thinks they are. That’s a hell of a step. And if I could start Earth all over again, I would always make sure that if you had to answer the question, “Who are you?” then you’d have to say, “I’m an Earthling.” That way you don’t get trapped in what somebody thinks is your gender and your race.

Making distinctions is not always improper. There is a difference, for instance, between a gopher snake and a rattlesnake, though they can look very similar. It's important to know the difference. How true it is, though, as Giovanni says, that we often create distinctions without a real difference. The category of "race" is certainly one of them.
My mother had a slogan, frequently deployed to instruct her children (including me). I have only just now learned, in preparing this blog posting, that what my mother told me dates to the 15th century:
Comparisons Are Odious
When we find ourselves making distinctions between two different things, and the purpose of the distinction is to "compare" the two things, so as to determine which is "better" in some way, we are almost certainly going astray. That's what my mother taught me.
That's what Nikki Giovanni is saying, too. The broadest categories - the categories that include everyone - are the most important categories to consider, when we think about what is most important in this life. Whatever one's color, or gender identification may be - whatever other distinction might be found by which to compare us - what really counts, in the end, is what we have in common, not the distinctions that divide us. We will all be saved, if the Earth is saved, when we realize that we are, indeed, "Earthlings," mysteriously alive, together, on the beautiful planet of which, as far as we know, there is only one.
There aren't going to be any "Martians" coming to ask us, "Who are you?"
That's a question we need to ask ourselves - and the only "correct" answer is an answer that includes us all.
To Subscribe Just Click This Link
Image Credit:
https://www.nytimes.com/interactive/2021/12/27/magazine/nikki-giovanni-interview.html