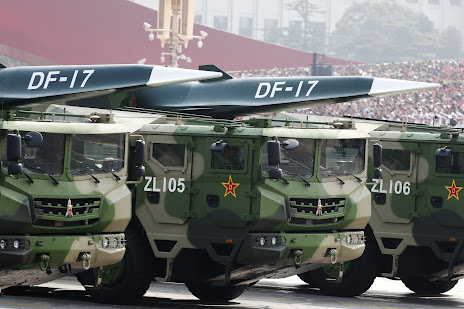 Here's what The Wall Street Journal said in an editorial statement on October 18, 2021:

Most Americans believe the U.S. has the world’s most dominant military, but that dominance is ending. The report that China has tested a new hypersonic missile should alert the country to the growing danger.

“China tested a nuclear-capable hypersonic missile in August that circled the globe before speeding towards its target,” reports the Financial Times. Hypersonic missiles are harder to track and destroy than ballistic missiles and could evade U.S. missile defenses.

The hypersonic news follows the discovery this year of hundreds of new missile silos in the Chinese desert, almost certainly for nuclear missiles. This isn’t the behavior of a nation merely interested in defending its sovereignty. China has global ambitions, and they include projecting military power as a way to assert its political and commercial interests.

This is important to understand because the next major war won’t look anything like the last one. The U.S. homeland was spared from most of World War II’s destruction. But the next conflict will feature cyber attacks, hypersonic missiles, and unmanned vehicles using artificial intelligence that put the U.S. at risk of attack from afar. Hiding behind fortress America won’t be possible, if it ever was (emphasis added).

OK, Americans, this is our "hypersonic wake up call!" Thank you, Wall Street Journal.
If you believe what The Journal has to say here, there "will be" - and maybe soon - a "next major war." The New York Times is pretty much on the same page.
In a news analysis published on October 17, 2021, The Times is predicting a "Cold War between Beijing and Washington," which a couple of paragraphs later has become a "Cold War, or something quite different."
I think by "quite different" The Times means not "Cold" at all, but in fact a "real" war, a war in which the two nations start killing people "at scale," as those Silicon Valley types might say.
That New York Times prediction is pretty ominous, but still not quite as terrifying as The Wall Street Journal's more definitive statement that there "will be a next major war," and a war that The Journal states "will feature cyber attacks, hypersonic missiles, and unmanned vehicles using artificial intelligence."
This is not a cheery prospect, it seems to me, and as Bob Dylan might say (well, he actually did say it), "If God's on our side, he'll stop the next war."
Maybe I should stop right there. I couldn't ever really top Bob Dylan, but let me say one more thing.
There is nothing "inevitable" about anything. A newspaper that announces "the next major war," as though that "next major war" is some sort of factual "thing," and that this hypothetical "next major war" is as real as the last war that actually did take place, is inviting us to deny the reality of human choice and human freedom.
We can hope and pray that God might solve the problem, and "stop the next war." Absent any certainty about that, however, let us treat The Wall Street Journal's editorial statement as the "wake up call" they say it is.
Besides reversing the processes of global warming that are putting the stability of the Natural World at risk, and that are threatening the end of human civilization, let's assign ourselves the task of stopping that "next war."
Nothing about that "next war" is inevitable. If it were to take place it would be horrible. Thus, we need to organize ourselves to do what we must do to make it impossible that there will ever be a "next war." Who is going to be in charge of that effort?
Maybe I should end this commentary with Bob Dylan after all. What I said on November 19th remains a reliable guide to what we need to do - each one of us.
We each need to own this assignment. We each need to "sing along," and to stop the "next war."
And as Bob Dylan might say (well, he actually did say it), we each need to remember and realize that it's "Up To Me."
__________________________________________________
Image Credit:
https://www.wsj.com/articles/chinas-hypersonic-wake-up-call-11634596933
To Subscribe Just Click This Link