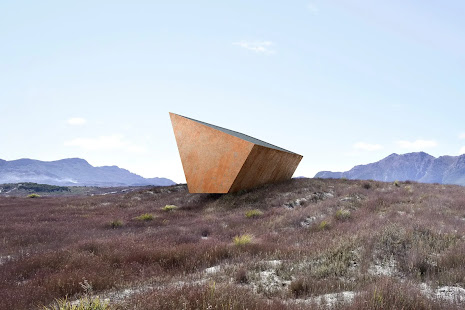 The New York Times reported, on December 11, 2021, that a steel vault, about the size of a school bus, will soon be placed in a remote part of Australia. The steel vault, called "Earth's Black Box," will "record the Earth's warming weather patterns." It will also "listen to what we say and do," creating an "archive that could be critical to piecing together the missteps ... should humanity be destroyed by climate change."
The Times' article was headlined, "A 'Black Box' for an Earth In Danger of Climate Crash." An artist's rendering of how the project might look is pictured above. The "Black Box" is scheduled to be constructed in Tasmania, an Australian island state off the south coast.
Comparing the current status of our planet to an airplane that might crash seems appropriate. Anyone paying attention knows that a "Climate Crash," as The Times calls it, is a distinct possibility. Some call it an inevitability.
Collecting information that might be useful for anyone who survives the Climate Crash (presuming that such a crash actually does occur, and further presuming that someone survives it) is probably a worthwhile project, though I personally would prefer more attention paid to "prevention," with "documentation" being a less urgent priority.
The "Black Box" project was apparently conceived not by climate scientists, which is what you might think, but by an Australian advertising agency. Jim Curtis, the executive creative director of the agency said (a sentiment shared by virtually everybody), “I really hope that it’s not too late.”
Mr. Curtis also said something I find a lot more problematic. According to Curtis, the box will be designed “to hold our leaders to account.” That seems to be the main point. The "Black Box" will mine the internet for evidence of what the "leaders" are doing, and if everything comes crashing down, their failure to avoid the tragedy will be fully revealed.
Here is my problem with Curtis' statement. Our current situation is typified by all of us thinking that someone else should solve our "Climate Crash" problem. It is a problem that we all know exists, but we have talked ourselves into the idea that it is such a big problem that ordinary people really can't deal with it. We think some governmental agency, or some scientific consortium, or some set of farsighted corporate and foundation executives - some set of "leaders" - ought to extricate us from our perilous position. Meanwhile, we continue to live what we have come to think of as our "normal life."
I would like to propound the opposite hypothesis. Looking to (and blaming) our "leaders" is the wrong way to save the planet. WE are implicated. The problem is not the "leaders." It's "us." Therefore, if we avert the predictable "Climate Crash," it won't be because our "leaders" finally got it right. It will be because we decided, in a cascading chain of people doing something new themselves, that we will take the helm and steer the ship of our civilization into a new, and completely different, direction.
Unlikely? Maybe, but I think that this is the way that genuine change will actually come. It's not going to come from the "leaders," and we won't really be able to blame the "leaders" if our civilization comes crashing down. As Michael Jackson told us, it's that "Man in the Mirror" whom we ought to be holding accountable.
Bob Dylan has a great song about individual responsibility. It's called, "Up To Me." Click that first link to listen to the song. Click the second link to read the lyrics. To translate the same thought into "political" language, let's remember this absolutely accurate description of how genuine political change is always accomplished:
When The People Lead, The Leaders Will Follow
Image Credit:
https://www.nytimes.com/2021/12/09/world/australia/earth-black-box-climate-change.html
To Subscribe Just Click This Link