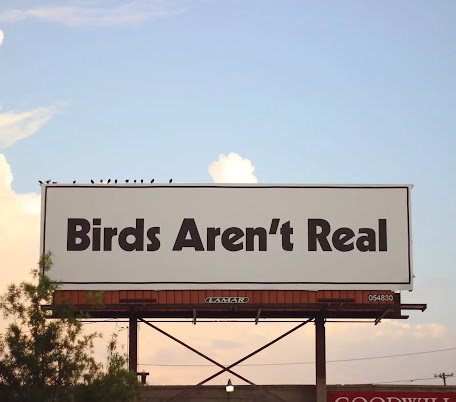 Apparently, there is a large and "viral" online movement that operates under the slogan, "Birds Aren't Real." This online phenomenon, of course, does end up interacting with the "real" world itself. It has interacted, for instance, with the real world of billboard signs, as you can see from the photo above. Real money had to change hands in connection with that billboard. It costs quite a bit to populate a billboard with whatever text a purchaser might want.
It is wonderfully ironic, I think, that what definitely appear to be "real" birds have chosen the above billboard to take a breather, and to teach anyone looking at the billboard that you need to be skeptical about anything you might read on a billboard (or read anywhere else, for that matter). Take the billboard below as another illustration of the principle: 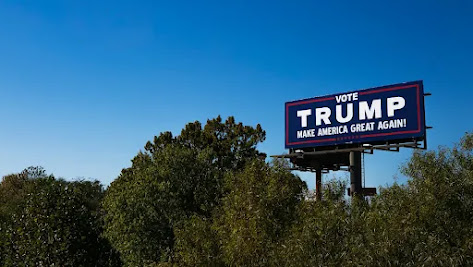 I didn't actually start out this blog posting with the intention of making fun of the pretensions of our former president, and the idea that voting for him would help "make America great again." That just kind of came to me, since I got to talking about billboards. I started out this "Birds Aren't Real" blog posting because of an article I read in the December 9, 2021, edition of The New York Times. Everything The Times was talking about in that article was new to me, and pretty astounding. The Times' article is titled, "Birds Aren’t Real, or Are They? Inside a Gen Z Conspiracy Theory."
As I learned from the article, the "Birds Aren't Real" movement was invented in 2017 by Peter McIndoe, then twenty years old. Here is how Audubon describes the origin of the movement in a November 16, 2018, article in its "Birds In The News" section:

The CIA assassinated John F. Kennedy after he refused to kill and replace billions of birds with drones. The U.S. government is sequestering a team of Boeing engineers in Area 51 for a secret military mission. Our tax dollars have been funneled into building the “Turkey X500,” a robot used to hunt large birds.

Combine all these conspiracies and you get Birds Aren’t Real, a nearly two-year-old movement that claims the CIA took out 12 billion feathered fugitives because directors within the organization were “annoyed that birds had been dropping fecal matter on their car windows.” The targets were eradicated between 1959 and 1971 with specially altered B-52 bombers stocked with poison. They were then supplanted with avian-like robots that could be used to surveil Americans.

Sounds extreme but also somewhat fitting, given the landscape of today's social discourse. By surfacing murky bits of history and the ubiquity of Aves, Birds Aren’t Real feeds into this era of post-truth politics. The campaign relies on internet-fueled guerilla marketing to spread its message, manifesting through real-world posters and Photoshopped propaganda tagged with the “Birds Aren’t Real” slogan. For much of its devoted fanbase, Birds Aren’t Real is a respite from America’s political divide—a joke so preposterous both conservatives and liberals can laugh at it. But for a few followers, this movement is no more unbelievable than QAnon, a right-wing conspiracy theory turned marketing ploy that holds that someone with high-level government clearance is planting coded tips in the news. Therein lies the genius of Birds Aren’t Real: It’s a digital breadcrumb trail that leads to a website that leads to a shop full of ready-to-buy merchandise.

In January 2017, Mr. McIndoe traveled to Memphis to visit friends. Donald J. Trump had just been sworn in as president, and there was a women’s march downtown. Pro-Trump counterprotesters were also there. When Mr. McIndoe saw them ... he ripped a poster off a wall, flipped it over and wrote three random words: “Birds Aren’t Real.”

“It was a spontaneous joke, but it was a reflection of the absurdity everyone was feeling,” he said...

Mr. McIndoe decided to lean into Birds Aren’t Real. “I started embodying the character and building out the world this character belonged to,” he said. He and Connor Gaydos, a friend, wrote a false history of the movement, concocted elaborate theories and produced fake documents and evidence to support his wild claims.

“It basically became an experiment in misinformation,” Mr. McIndoe said. “We were able to construct an entirely fictional world that was reported on as fact by local media and questioned by members of the public.”

In 2018, Mr. McIndoe dropped out of college and moved to Memphis. To build Birds Aren’t Real further, he created a flyer that shot to the top of Reddit. He hired an actor to portray a former C.I.A. agent who confessed to working on bird drone surveillance; the video has more than 20 million views on TikTok. He also hired actors to represent adult bird truthers in videos that spread all over Instagram.

“All the money from our merch lineup goes into making sure me and Connor can do this full time,” Mr. McIndoe said. “We also put the money into the billboards, flying out members of the Bird Brigade to rallies. None of the proceeds go to anything harmful.”

In September, shortly after a restrictive new abortion law went into effect in Texas, Birds Aren’t Real members showed up at a protest held by anti-abortion activists at the University of Cincinnati. Supporters of the new law “had signs with very graphic imagery and were very aggressive in condemning people,” Mr. McIndoe said. “It led to arguments.”

Mr. McIndoe now has big plans for 2022. Breaking character is necessary to help Birds Aren’t Real leap to the next level and forswear actual conspiracy theorists, he said. He added that he hoped to collaborate with major content creators and independent media like Channel 5 News, which is aimed at helping people make sense of America’s current state and the internet.

“I have a lot of excitement for what the future of this could be as an actual force for good,” he said. “Yes, we have been intentionally spreading misinformation for the past four years, but it’s with a purpose. It’s about holding up a mirror to America in the internet age.”

Now that McIndoe has helped generate a whole universe of "misinformation," centered on the supposed non-existence of birds - all with good intentions, of course - he thinks it's time to "break character."
Maybe "break the spell" would be a better way to describe his intentions. At least the way I get it, McIndoe thinks it's time to reacquaint Americans with the perils of "post truth politics," however satisfying it may seem for us to indulge ourselves in outlandish assertions. If I am reading his intentions correctly, McIndoe thinks it might be possible to get more people to reject the idea that just because someone says something, loud and long - just because they put it on a billboard, or tell you in a podcast, or because you see it on Fox News, or MSNBC - that doesn't mean it's actually true. Truth and reality, not what panders to our prejudices and passions, ought to be our objective.
If we could just get to that place, which seems like a good place to get to, then when somebody loudly proclaims something idiotic, like "Birds Aren't Real," we would all be prepared to stand right up, and to shout right back:
Oh, Yes They Are!
Image Credits:
(1) -  https://www.nytimes.com/2021/12/09/technology/birds-arent-real-gen-z-misinformation.html
(2) - https://www.commercialappeal.com/story/news/courts/2017/04/03/memphis-judge-throws-out-state-billboard-act/99984504/
To Subscribe Just Click This Link