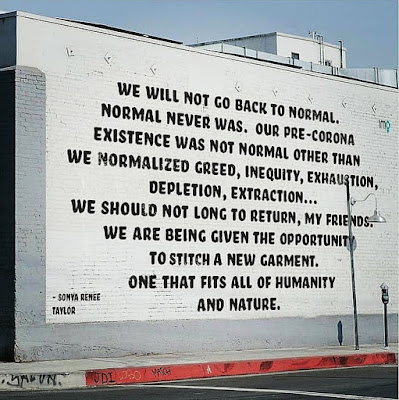 Yesterday, I used the image above at the bottom of my blog posting. I decided I should move it to the top and replay its message.

As I read a column from the May 13, 2020, New York Times, I realized that lots of people think that we must, as a nation, and as individuals, now make real and significant change in what has come before, in what we have called "normal," though normal it never really was.

I am referring, specifically, to Roger Cohen's column titled, "No Return to the 'Old Dispensation.'" I am reproducing the column below, since readers might run into a paywall should they try to follow the link. Try the link, certainly, but if you can't get through, you can read what Cohen wrote right here.

I have one observation. If we are serious about wanting to make a change, the kind of change that can save our human world, we must recognize the truth that Cohen proclaims, and admit both that "modernity is a monster" and that we, individually, must change our lives.

We must also heed what Michael Jackson says, in his thrilling song, "Man in the Mirror." He tells it just like Cohen does: "If you wanna make the world a better place, take a look at yourself and make a change."

No Return to the ‘Old Dispensation’

The monster of modernity must be slowed
By Roger Cohen - Opinion Columnist
May 8, 2020

In T.S. Eliot’s “Journey of the Magi,” the three wise kings, having witnessed the birth of Christ at the end of a long and difficult journey, return home to find themselves “no longer at ease here, in the old dispensation.”

Back in “our places,” the kings are troubled. They feel they are in the presence of “an alien people clutching their gods.” Yet they left their kingdoms not so long ago. What has transpired to estrange them so from all that was once familiar? How can they question the very worlds they shaped?

The narrator, one of the kings, is led to speculate on what they have seen in Bethlehem during their journey: “I had seen birth and death,/But had thought they were different; this Birth was/Hard and bitter agony for us, like Death, our death.”

The birth of Christ is also the death of their pagan worlds. There is no going back to the “old dispensation.” There is return only in the physical sense. To live as they once lived has become impossible. They no longer see their fellows before them. They see strangers with idols.

I have been thinking of this short poem because perhaps the deepest question posed by the pandemic is whether there can be any return to the “old dispensation.” This “agony” could constitute a revelation, or even a redemption, or it may merely be a costly interruption.

Having witnessed the unimaginable, having been on this journey into an unfamiliar world of silence and stillness and death, having been obliged to change unquestioned habits, will humanity simply return to its former ways if that proves possible?

To bet against the human tendency to relapse into old bad habits is foolish. Tragedy tends to foster expressions of idealistic unity that prove fleeting. Remember Sept. 11.

The history of greed, venality, stupidity, cruelty and violence is long because that part of human nature is ineradicable. As the 20th century demonstrated, it is better to bet on a liberal society’s capacity to temper these flaws and iniquities than on a utopia’s false promise to eradicate them. Those promises end being written in blood.

In a provocative BBC podcast, Zia Haider Rahman, a British novelist, alludes to Eliot’s poem and concludes that people will no doubt return to the old dispensation, more or less, “and in short order.” They will do so, he suggests, for the simple reason that no alternative is within easy reach.

“What,” he asks, “can possibly slow the monster of modernity?”

The monster that has given global corporations the ascendancy over individuals and created, in an advanced society like Britain, a situation where the life expectancy of the elderly has been falling and the infant mortality rate rising.

This is the same monster, turbocharged by technology, that in the United States has produced fast-growing inequality, diminishing class mobility, growing precariousness in the workplace and broad social fracture. The coronavirus, attacking those most vulnerable above all, has had a field day in this America, just as Donald Trump had one promising to “make America great again.”

“American carnage,” it turns out, was not Donald Trump’s inaugural-day description of the country’s recent past, but his prediction for the country under his rule.

Of course, globalization also ushered hundreds of millions of people from poverty and opened myriad possibilities for human advancement. But cycles of history run their course. By 2008 it was clear that the world economic system was seriously skewed. Bailed out, it staggered on until now, accompanied by growing anger in Western societies. The rise of autocrats has been a direct reflection of their ability to exploit popular frustrations with anonymous global forces.

The virus is a searchlight that lays everything bare. All the grotesque needed, to be revealed as such, was for time to stop. How quickly the world greens and new life stirs when the trains, planes and automobiles fall silent. What the frenetic “old dispensation” was doing to the fragile environmental health of the planet is right there in plain sight.

I agree with Rahman that change will be hard. It always is. But a lot of people, in this quieted world, have experienced some transforming miracle, such as that brought on for the Magi by an infant in a stable on a bed of straw. They have heard Rilke’s admonition in the last line of “Archaic Torso of Apollo:” You must change your life.

Perhaps rebalancing is a useful word because attempts at wholesale reinvention, like those utopias, tend to end badly. From consumption to contemplation, from global to local, from outward to inward, from aggression to compassion, from stranger to guest, from frenzy to stillness, from carbon to green.

My life has been uneventful these past weeks; it has also been richer. I’ve been thinking about children and the virus, this invisible thing that upended their lives, closed schools and playgrounds, ended play dates, introduced them to Zoom. How they draw the hideous red spiky-headed pathogen with spindly legs and downturned mouth. How they advise their furry animals they cannot leave the dollhouse today “because of the virus.” How they ascribe cancellations of their activities to “the virus.” How they will put a mask on stuffed animals, because of the virus, and how they want to be told fairy tales, to be distracted from the virus.

For them, and for this vulnerable planet, and more than 33 million newly unemployed Americans, it is worth trying to ensure that the “old dispensation” yields to something new, something more balanced, born of a strange revelation (emphasis added).