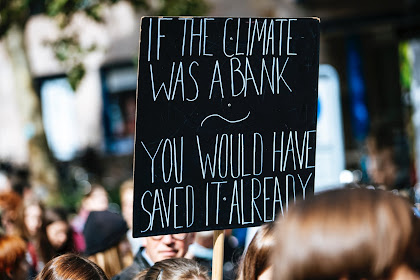 Professor Jem Bendel wrote a paper in 2018 that attracted a great deal of attention. Bendel's paper has since been revised, in a second edition, released in 2020. Click the following link to read the revised edition of Bendel's paper, "Deep Adaptation: A Map for Navigating Climate Tragedy."
What's the main message of Bendel's "Deep Adaptation" paper? One short description might be: "We're doomed!" Here is an excerpt from the Abstract of the most recent version, which gives you the idea:

The purpose of this conceptual paper is to provide readers with an opportunity to reassess their work and life in the face of what I believe to be an inevitable near-term societal collapse due to climate change.

The approach of the paper is to analyse recent studies on climate change and its implications for our ecosystems, economies and societies, as provided by academic journals and publications direct from research institutes.

That synthesis leads to my conclusion there will be a near-term collapse in society with serious ramifications for the lives of readers. The paper does not prove the inevitability of such collapse, which would involve further discussion of social, economic, political and cultural factors, but it proves that such a topic is of urgent importance. The paper reviews some of the reasons why collapse-denial may exist, in particular, in the professions of sustainability research and practice, therefore leading to these arguments having been absent from these fields until now (emphasis added).

Most recently, Bendel has authored a seven-part essay "on the type of policy innovations that would respond to the truth of the environmental predicament." The first part of Bendel's essay is titled, "This is what a #Real Green Revolution would include." If you would like to follow Bendel's argument to the end, subsequent parts of the essay are linked in that first posting. You can also, by clicking on the link just provided, subscribe to Bendel's "Deep Adaptation" blog.
I can't really disagree with Bendel that it makes sense for every one of us to "reassess" our work, and life, in light of the economic, social, and political challenges that are already evident to those who are paying attention, and that will certainly accompany the continuing climate crisis in which we are already so deeply enmeshed. I think it would be good for everyone to listen to what Bendel has to say.
"Doom," however, isn't the way I like to think about the challenges we have put to ourselves by human-caused climate change.
Bottom line for me is the thought that human beings can actually surprise themselves (and often have) by taking actions that no one would ever have suspected were even possible. This happens, certainly, as individuals do something new and unexpected. We can also act collectively to transform what seems to be an inevitable "reality" into a completely different "reality." In our human world, "reality" is what we make it. What we need to realize is that our human realities are ultimately dependent on the World of Nature, upon which everything depends.
Within the realm of human action, "possibility" is the most important category. Streets without cars, for instance, could actually become a real "thing." That would mean a profound reduction in greenhouse gas emissions.
An end to military spending and an end to war are also possible. Hard to achieve, perhaps, but definitely possible.
It would also be possible to redirect the economic resources of the United States and the other wealthy nations of the world into expenditures that would insure the preservation of the Amazon rainforest, and that would implement effective actions to eliminate further emissions of methane and other greenhouse gases.
Bottom line? If "adaptation" to an "inevitable near-term societal collapse" is what we are being asked to plan for, count me out. Adaptation to "Doom" is not an agenda I want to pursue.
Image Credit:
https://jembendell.com/2021/11/08/are-intergovernmental-alliances-for-saving-humanity-still-possible-part-5-of-a-realgreenrevolution/
To Subscribe Just Click This Link