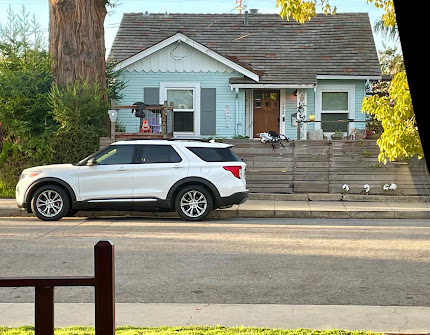 A scene from my neighborhood is pictured above. As I looked from the street to that cute little cottage-style house, something about this picture seemed to whisper in my ear, "Wouldn't that be a really great picture if the car weren't there?"
Think about it. Wouldn't it be great it we could have our streets without cars? Not only would the aesthetics of our world improve, air quality would, too. And we wouldn't be contributing nearly as much to the global warming crisis. One estimate says that 40% of the greenhouse gas emissions in California come from the transportation sector. Fewer cars would mean fewer accidents and deaths, too. Though I didn't know her personally, I was terribly distressed to learn that a member of the Alameda County Board of Supervisors, Wilma Chan, was killed by an automobile as she was walking her dog, on a recent morning, in her own neighborhood. County Supervisors, and former County Supervisors, and all of us, are constantly at risk.
One global warming solution currently being advanced is to transition our gasoline-burning vehicles into electric ones. Definitely better, but scenes like the one below wouldn't change much, and there would still be a car in front of that cute little cottage-style house.

Is there any alternative? It seems to me there is. However, the alternative requires a "collective" as opposed to an "individual" approach to personal transportation. What about sharing, in other words? Suppose that no one had an individual vehicle (usually parked on the public street in front of their home). How would we all get around?
Well, what about a public service, employing the kind of modern technologies utilized by Lyft and Uber? Any person, anywhere, could use their omnipresent cell phone to indicate that they needed a ride from where they then were, to where they wanted to go. A shared vehicle could be there very quickly, routed by those famous algorithms we know about, and would get us to where we want to go even faster than the old way. You don't believe that? How long does it take to park? How many times do you get into traffic snarls like the one shown above (that's every day, in Santa Cruz County)? Almost every vehicle shown is carrying ONE person. If the vehicles on this stretch of Highway One were each carrying four, or six, or eight, or ten persons, they would all be zooming along.
Of course, there would also be those inevitable cost savings, if we would only rearrange our transportation expenditures from "individual mode" to "collective mode." The average cost of owning and driving a personal vehicle is on the order of $5,000 per year. If everyone who is currently undertaking that $5,000 per year expenditure for a personal vehicle could get effective shared transportation at half the cost - which I think is probably a pretty good estimate - each person who traded into the new, shared system would have an extra $2,500 per year for her or his personal priorities.
Interestingly, right after I wrote out this blog posting, I opened up The Wall Street Journal, and I discovered that the idea that I have just outlined above is something that The Wall Street Journal is suggesting, too. According to The Journal, moving to a shared transportation systtem both could, and should, revolutionize how we get around.  There will be a "paywall" problem for many, of course, but if you can penetrate the paywall you'll be able to read "What A Commute In A Car-Free City Might Be Like."  According to The Journal, that commute would be pretty much like what I have outlined here.
Sharing! What a concept! It could actually work!
__________________________________________________
Image Credits:
(1) - Gary A. Patton personal photograph
(2) - https://cruz511.org/drive/traffic-conditions/
To Subscribe Just Click This Link