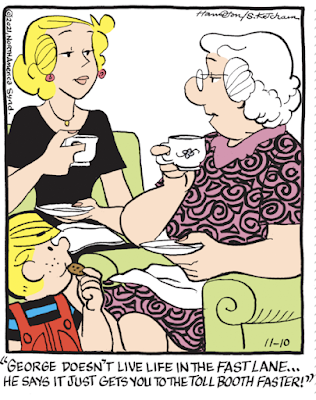 The same day I saw the cartoon, above, in The San Francisco Chronicle, I read about Courtney Barnett in the "Arts" section of The New York Times.
According to Wikipedia, Barnett (born on November 3, 1987) is an Australian singer, songwriter and musician "known for her deadpan singing style and witty, rambling lyrics." Barnett's third studio album is titled, Things Take Time, Take Time. The album was released in November, which is why The Times profiled Barnett in its November 10, 2021 edition.
Incidentally, Barnett will be appearing in Oakland, California, at the Fox Theatre, on December 12th - two days from now. It's probably a long shot, but maybe tickets are still available!
I am not, actually, a Courtney Barnett fan (not that I have anything against her). I pretty much stay on the Bob Dylan side of the street, musically speaking, and my acquaintance with the Fox Theatre in Oakland is limited to the fact that I did see Bob Dylan appear there, once, some years ago. It is surprising, actually, that I chose to read The Times' article on Barnett and her new album, which article was titled, in the hard copy edition, "She Knows Small Is Also Eternal." I did read the article, however, because the subheading (again, in the hard copy edition) said this:

That statement caught my attention because I have always believed (rather correctly, I think) that if there is one thing that is not "uncertain," death is that thing. Hank Ketcham, in his "Dennis the Menace" cartoon, clearly agrees. Though I scoured the article in The Times, I didn't find any statement by Barnett that supported the idea that Barnett thinks that death is among the "uncertainties" of life.
Let's all face the facts. Death is not "uncertain" at all. Other things are "uncertain" - most things are "uncertain," in fact - but death is not one of those "uncertain" things.
Because we don't really like this part of the bargain - we get to be, rather mysteriously, alive, but only on the condition that our death is inevitable - we keep doing what the person who wrote that sub-headline in The Times did. We keep avoiding, or trying to avoid, an encounter with our actual, human situation. We seek to avoid a genuine encounter with life - because we know what "life" really means. That slip-up in the grammar of The Times' subheading gives away our congenital effort to avoid thinking about and confronting the most basic and fundamental truth of our existence.
As I have pointed out before in this blog, the World of Nature, upon which we ultimately depend, works on a formula that we try our best to avoid contemplating:
LIFE > DEATH > LIFE
The quicker we can come to terms with this truth, the quicker we can then realize the immense possibilities of the life we have. In the moment (now) that we are alive, everything is possible, which makes our life "uncertain." That is a "feature not a bug" of the way the world is structured.
In the brief moment, mysteriously granted to us in the World of Nature into which we are born, we have the opportunity to confront the infinite "uncertainty" that translates, in our human realm, into "possibility." We make our human world by taking action in the "now," and we can make it as we choose. We make our choice by taking action, which is the essence of our human freedom.
As George Fox, the Quaker, tell us (and this is very good advice, indeed):