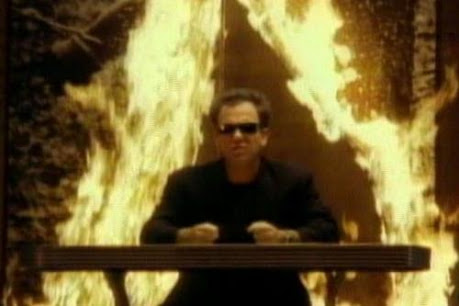 That's Billy Joel, above, with a picture from the official video of Joel singing his 1989 hit, "We Didn't Start The Fire." If you click this link you can read the complete lyrics. The chorus goes like this:

In case you're not familiar with it, Joel's song is what Wikipedia calls a list song: "Its fast-paced lyrics include brief references to 118 significant political, cultural, scientific, and sporting events between 1949, the year of Joel's birth, and 1989, in a mainly chronological order."
Is "We Didn't Start The Fire" one of my favorite songs? Well, not really - or at least not up until now. I have to confess that I have no recollection of ever having  heard (or heard of) this song until I read an article about it in the Wednesday, August 25, 2021, edition of The New York Times. That article brought the song to my attention.
Well before 1989, when "We Didn't Light The Fire" was a hit, I had placed myself in a musical closed garden, bounded on all sides by the songs of Bob Dylan. If, on August 24th, someone had challenged me to name a "list song," I am pretty sure I would have responded with a reference to "Murder Most Foul," a recent Dylan composition which is his longest-playing song, ever. Actually, "Murder Most Foul," which is definitely a "list song," has some similarities to "We Didn't Start The Fire," though Dylan's song does not seek to duplicate the frenetic pace of Joel's effort.
The Times' article that drew my attention to "We Didn't Start The Fire" was written by Lindsay Zoladz, a pop music critic living in New York City. Zoladz reports that Joel's song "thrilled" her when she was four years old. Now, though, she questions her judgment. She tells us that even Billy Joel has "mocked" the song, and she sounds a bit apologetic about her early enthusiasm:

I have ... felt a need to ... avoid coming to terms with an embarrassing truth, which is that my first favorite song — yes, me, a person who grew up to be a professional music critic — is a song hated so vehemently by some people that its own Apple Music catalog description admits that it regularly shows up on “worst song” lists. It certainly seems to be one of the most parodied songs in pop music history. Even its own composer has an ambivalent-at-best relationship to its existence and has repeatedly compared its monotonous melody to a “dentist’s drill” and “a droning mosquito.”

I am talking about Billy Joel and his notorious, wildly mystifying 1989 U.S.-history-lesson-on-Adderall “We Didn’t Start the Fire,” which as a 4-year-old I believed to be the greatest song ever recorded.

I  would definitely say that "We Didn't Light The Fire" is NOT "the greatest song ever recorded" - and it appears to me that even Zoladz would agree, at this point. Nonetheless, having now been introduced to the song, let me say that I like it quite a bit. I particularly like the official video (available below) which starts off with clips from "I Love Lucy," which is something I do remember from my far-off youth. I certainly encourage anyone reading this blog posting to watch the video. It's a bit over four minutes in length.
I have two contradictory reactions to "We Didn't Light The Fire," which lists many events associated with our past history, some of which continue to affect our history today. Many of the events that make the list are what we would probably call "bad" things. The song claims that we didn't "start" the fire that is engulfing our world, and then suggests that we are, despite our innocence, "fighting" it bravely, doing the best we can.
Well, the feeling that we are called upon to "fight" the battles that history has brought to us does resonate, I think, with everyone's experience. History precipitates itself into our present, and challenges us (requires us, actually) to respond. The present moment in which we live is the product of historical events that have swept into our lives like our our California wildfires, and we are compelled to "fight," in the present, what history has brought to us from the past, though we can't, really, be charged, individually, with having caused the circumstances in which we have to fight.
That's all true, and Joel's song extends some sympathy to us for having found ourselves in this arguably "unfair" situation.
There is, though, another perspective. The world in which we live, the "historical" world of human events and action, is truly a human creation - and that world is the result of our past actions. "We," collectively understood, are in fact the ones who have "started the fire." Our present responsibility for what exists in the world is not, in fact, "unfair."
The California wildfires are actually a good example of what I am talking about. The former residents of Greenville, California (or maybe I should say the "residents of the former Greenville, California") did not, individually speaking, "start the fire" that consumed their homes and their community.
But we did start the fire, collectively speaking, and we need to take responsibility for the history that has eventuated from our past actions, actions that continue right up to the present moment.
Maybe watching "We Didn't Start The Fire" can help us reflect on our real human situation, and maybe, as we accept our responsibility for the common human world in which we live, we will recommit ourselves to that world and to the fight that will be necessary to sustain it. Maybe such recognition, accepted, not rejected, as in Joel's song, will support us as we "fight on," as fight we must.
In Between Past and Future, Hannah Arendt makes clear that this is exactly what we have to do.
We didn't start the fire?
Maybe not - but maybe we did, right? We can choose to consider ourselves as relatively blameless individuals, unfairly caught up in a reality that is the product of past actions for which we have no individual responsibility. Or, alternatively, we can decide that we are willing accept our individual responsibility for the collective reality that has been our human creation - the reality in which we now find ourselves.
However we wish to think about it, here we are! Right in the middle of the flames!