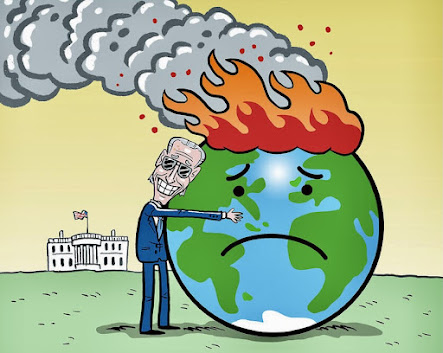 In These Times is telling us "We Don't Have Time for Climate Symbolism." Anyone who has been reading the newspapers, or who has been smelling the smoke, knows that's true. So, what's happening, folks?
Here is how In These Times sees it:

The crux of the problem is Biden’s unwillingness to take on the fossil fuel industry. Instead of a robust plan to end drilling, his administration promotes industry-backed ​“solutions” like carbon capture. But at power plants, carbon capture has cost billions of dollars without removing a significant amount of emitted carbon. Filtering carbon directly out of the air is even more fanciful. The United States emits around 6.5 billion metric tons of carbon dioxide equivalents per year. To remove even 1 billion tons through direct air capture would take nearly our entire annual energy output, one study shows.

This industry-friendly approach is mirrored by Biden’s team. Biden’s energy secretary, Jennifer Granholm, touts increased exports of liquified natural gas as a solution, while climate advisor Gina McCarthy (who ran interference for the fracking industry in the Obama administration as head of the Environmental Protection Agency) made it clear that ​“the administration is not fighting the oil and gas sector,” according to a White House summary of a meeting she held with oil and gas companies in March.

FDR, talking about the utility industry and his efforts to promote public power, famously implored voters to judge him by his enemies. In the case of climate change, Biden’s approach should be judged by the ones he refuses to make.

California's governor, Gavin Newsom, now facing a recall because of his dining habits, rather than because of his allegiance to the fossil fuel industry, is pretty much on the same page with President Biden.
Better than the alternative isn't good enough, if we want to keep our planet habitable.
That's the crux of the problem!
Image Credit:
https://inthesetimes.com/article/climate-symbolism-biden-fossil-fuels-fracking-democrats