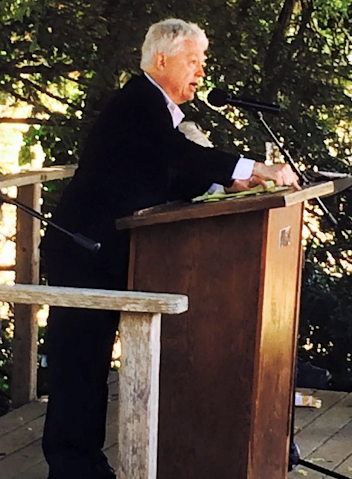 I don't usually have dreams at night, but just the other night I did have a dream. And what a happy dream it was! I can't tell you now where I was speaking, and what, exactly, I was talking about, but in my dream I was making a speech.
I have made a lot of speeches in my time. Click right here if you'd like to see a list.
The first speech on my speech list was a speech I gave to the California Association of LAFCOs, at its statewide conference in Monterey. LAFCO stands for "Local Agency Formation Commission," an agency created by state law to combat sprawl. In October 1978, which is when I made that speech, the voters of Santa Cruz County had just adopted Measure J (in June 1978). Measure J, which I wrote, was a referendum measure that established a Growth Management System for Santa Cruz County. Among other things, Measure J gave the strongest possible protection to Santa Cruz County farmland, and established an Urban Growth Boundary, both of which provisions, once enacted by the voters, saved Santa Cruz County from the fate of adjoining Santa Clara County. Measure J, in other words, was definitely "anti-sprawl."
If you don't remember the specifics of Measure J, which also included a path-breaking program mandating the production of affordable housing, as non-affordable development occurred, you can click on that Measure J link to see the text. You are also encouraged to click right here for "The Story of Measure J," an explanation of just how Measure J came to be, and what it does.
As you can undoubtedly tell, I am rather proud of Measure J. As you can also probably tell, at least if you read through that Speech List, I really like giving speeches! I am pictured, above, giving a graduation day speech to the graduates of the UCSC Environmental Studies Program. That was in July 2015, long after I had retired from the Santa Cruz County Board of Supervisors, and at a time when I was, clearly, coming to the end of my speechifying days. The last speech on my list was in May 2019, over two years ago.
There is, if not a specific formula, a set of guidelines that you need to think about if you want to make a good speech. The University of Arkansas proposes five "Rules of Rhetoric," which it denominates the "Canons of Rhetoric." Generally, I am good with just three basic guidelines, often called the "Rhetorical Triangle." These are: Logos, Pathos, and Ethos.
I have a hunch that I would still make a pretty good speech, if ever asked, but that "Ethos" thing is a problem. According to that "Rhetorical Triangle," "Ethos" can be thought of as "the role of the writer (or the speaker) in the argument, and how credible his or her argument is." In other words, you need to "speak with authority, and "not as the scribes." No longer being an elected official (I stepped down from the Board of Supervisors in January 1995), my "authority" is getting pretty thin.
I guess that is why I was so happy in that dream. At least while I was asleep, my authority must have been restored. I really do like giving speeches. Call me up if you ever need one!
"My name is Gary Patton." That's how I always start them off.
Image Credit:
Gary Patton personal photo